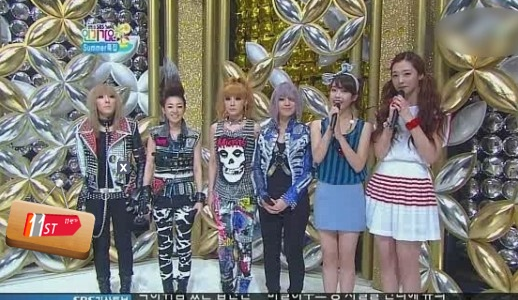 2NE1 Humiliated by f(x) Sulli Because of Height Difference

An older photo of f(x)’s Sulli standing next to the members of 2NE1 and IU recently resurfaced online, and it is creating a stir.

On an online community board, a photo with the title “2NE1 gets humiliated by Sulli” was posted. The picture shows the six women standing side by side on an interview during SBS “Inkigayo.”

The picture was particularly interesting because Sulli was taller than Sandara Park even though Dara had spiked up her hair completely in the oh so famous “Vegeta” hair.

Netizens who came across the photo commented, “Sulli must be tall” and “Sulli is 169cm…,” implying that Sulli isn’t as gargantuan as the picture misleadingly depicts and further implying that 2NE1 might be on the shorter side.

IU
2NE1
How does this article make you feel?