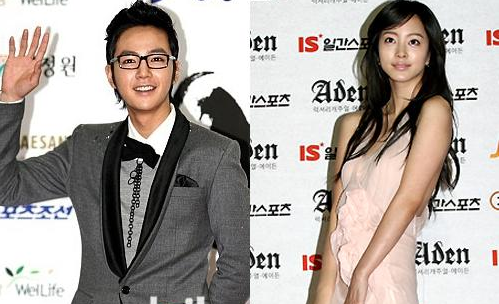 Jang Geun Suk and Han Ye Seul were interviewed in the most recent episode of KBS 2TV “Entertainment Relay” on the set of a coffee CF the two stars were shooting.

When asked if she had confidence in her aegyo, Han Ye Seul raised her hand straight up in the air. Jang Geun Suk, however, said, “They’re definitely going to make you to this (aegyo),” and did not raise his hand.

Jang Geun Suk also said, “Nuna really has a lot of aegyo. Even when you’re talking to her normally, she has a lot of aegyo in her voice.” Also, “When I first met nuna, I thought her throat was in her nose. A lot of different sounds came from her nose.”

To this, the producers of “Entertainment Relay” wrote “Han Ye Seul’s Power of Aegyo is Her Nose” as the subtitle and brought laughter to the viewers.

Meanwhile, Han Ye Seul garnered much attention for opening up about the controversy during the filming of “Spy Myeong Wol” on this day.

**Click the blue triangle on the top right of the photo to watch a 3-minute clip of the interview!**