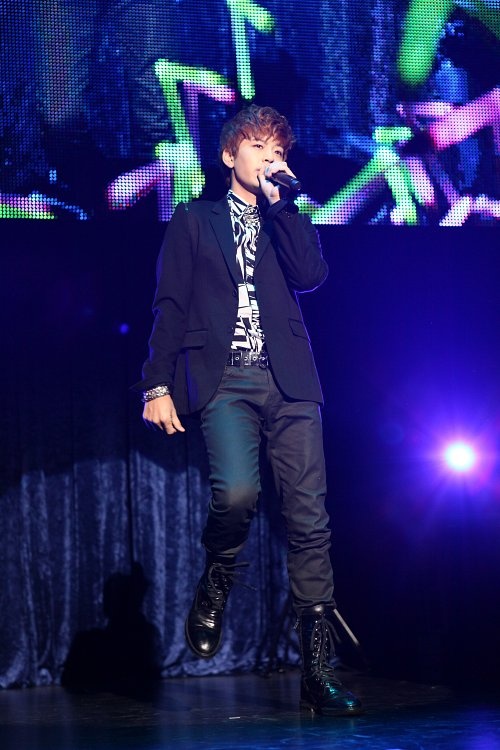 Se7en Gets a Surprise Visit During Japanese Showcase

Singer Se7en held a showcase in Japan to commemorate his latest single “Love Again” in front of 5,000 excited fans.

Se7en’s showcase was held in Tokyo, Japan where he treated fans to a mini-concert. During the show he performed a total of ten songs for his eager fans. Among the ten songs Se7en sang “Love Again,” “Somebody Else,” “Hikari,” “Angel,” and “I’m Going Crazy.”

“Love Again” has received much support in Japan as the single managed to chart on the day of its release. Since its release the single has made it onto the Oricon Daily and Weekly charts. When Se7en revealed “Love Again” as the next song his announcement was met with loud cheers. He had a special surprise for fans as he sang a Japanese version of his hit, “When I Can’t Sing.”

The ladies of 2NE1 had a nice surprise for their senior as they appeared unannounced during the showcase. 2NE1 reportedly is promoting in Japan as well, so when word of Se7en’s showcase made it to them they decided to show their support by making a surprise visit. The YG ladies were met with loud cheers and applause from the crowd. When Se7en saw his fellow YG Family members he was unable to contain his happiness.

CL had this to say before she handed the microphone off, “Usually it is me doing the MC-ing but Se7en-san is Minzy-chan’s ideal type and will do the talking today. Se7en-san congratulations.” In closing 2NE1 expressed their congratulations saying, “Se7en-oppa, congratulations to you on your seventh year anniversary!”

Once the showcase concluded Se7en Tweeted, “2NE1 made a surprise visit during my showcase! I am completely blown away! They are such supportive girls!” He then uploaded the following picture.

Se7en kicks off his busy schedule with showcase appearances in Tokyo, Fukuoka (May 5), Nagoya (May 6), and Osaka (May 12). He will continue his promotion schedule for his seventh single, “Love Again” with interviews and TV appearances.

2NE1
Japan
Se7en
Love Again
How does this article make you feel?