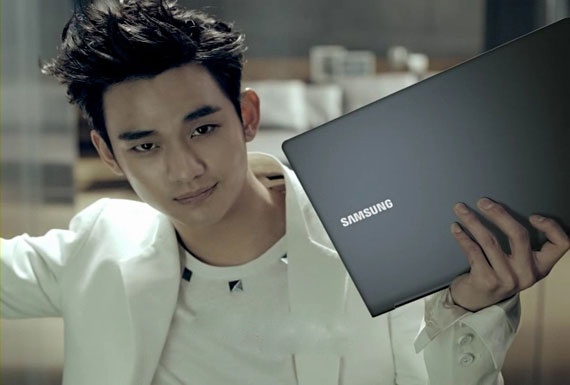 Kim Soo Hyun is on fire! Not only are his CFs appearing on the mainstream channels, but they are also appearing on many cable channels as well.

CFs are one of the best ways for widespread recognition. After the drama, “The Moon that Embraces the Sun” was ended, Kim Soo Hyun was chosen for 17 advertisements. This record surpasses the figure-skating queen, Kim Yu Na.

Kim Soo Hyun has recently been chosen as the model for a fabric softener brand, Pigeon. In the past, actresses such as Kim Hye Soo and Soo Ae were chosen as models for this brand. But this is the first time that a single male actor has been chosen.

In 2009, Kim Yu Na held the record of 15 CFs but this year, Kim Soo Hyun set a new record of 17 CFs in one year. Can you imagine the income he is receiving? News agencies report that Kim Soo Hyun is making over 6 billion won (around 6 million USD) by advertisements alone. This estimate was made from the average “A-list” celebrity income amount, which is around 300,000 to 350,000 USD per CF. So in reality, Kim Soo Hyun’s total income may be more than the 6 billion won.

Sources from Kim Soo Hyun commented, “This is something that happened only because of the fans. We won’t become arrogant and we will return this favor through future projects.”