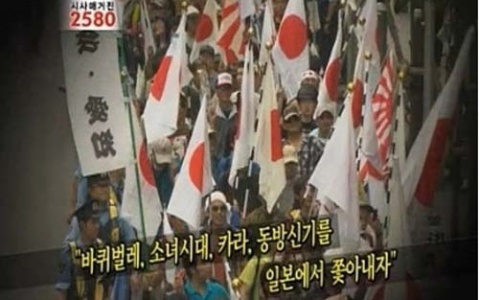 Most Ridiculous Anti-Hallyu Movements in Japan

Korea and Japan share a long history of a love-hate relationship. They are closely linked to each other, both historically and culturally, but there’s also a deep-rooted animosity that dates back centuries.

This strange sentiment goes across many sectors. The Korean pop culture industry has been no exception, and as popular as K-Pop is in Japan, we are slowly starting to see a surge in anti-Hallyu movements as well.

Of course, this doesn’t mean the recent anti-Hallyu movements in Japan represent the vast majority of Japanese people. But some of these extreme Japanese right-wing, anti-Hallyu groups (albeit small in size and influence) have sparked quite a stir among K-Pop fans for their distorted views and nonsensical accusations.

In this article, we will review some of the most ridiculous anti-Hallyu movements in Japan. Again, these movements do not represent the views of the Japanese as a whole, but it’s worth noting their difference in perspective from the casual K-Pop fans. Perhaps, the only way to solve this problem is to grow a better understanding of each other and accept/respect different cultures – as the old saying goes, “Don’t hate, just appreciate!”

What is your opinion on these anti-Hallyu movements? Could this possibly turn into a bigger issue? Share your thoughts!

Kim Tae Hee has oddly become the face of the recent anti-Hallyu movement. After her 2005 involvement in promoting Dokdo Island as Korean territory, some of the Japanese netizens questioned her stance on Korea-Japan relations, and argured how someone who is supposedly “anti-Japan” could possibly appear on Japanese TV. Although she released a statement explaining how often she visits Japan and loves reading/watching Japanese books and movies, hundreds of Japanese netizens took it to the streets for a protest in front of Fuji TV’s headquarters to demand her withdrawal from the drama, “99 Days with a Star.”

Things got worse earlier this year, as the same group of protesters forced Kim Tae Hee to cancel her press conference for Japanese pharmaceutical company Rohto. Their relentless protests resulted in Rohto to cut down Kim Tae Hee’s scene on their TV commercial from over 16 seconds to just six seconds long. Although the man accused of organizing these events (and threatened Kim Tae Hee not to visit Japan) was arrested last week, it doesn’t seem like the Kim Tae Hee protest will end anytime soon.

Just two weeks ago, T-ara’s Jiyeon was blasted by Japanese netizens for the way she ate ramen in her noodle commercial. In her CF for Korean noodle brand, “Shin Ramyun,” Jiyeon gives a tutorial on how to enjoy a bowl of ramen. But at the end, she eats the ramen off the lid of the pot. It’s pretty common in Korea to use the pot lid as your dish when eating ramen. But it’s considered rude and “barbaric” in Japan, and Japanese netizens took it wrong way, even questioning Jiyeon’s behavior as being “uncivilized.”

In February, Jang Geun Suk was wrongfully accused of saying he wanted to “eat” Japanese AV star Sora Aoi. But it turns out it was a result of Japanese media’s false reporting on his comment, where he actually said, “Sushi!” The video of his interview was later discovered by fans and he did answer “Sushi,” while Sora Aoi’s name was never mentioned in the clip. A week later, Jang Geun Suk tweeted a picture of Sushi with the message, “ “끝! おわり! finish!” (finish in Korean, Japanese, and English), putting an end to the laughable controversy.

2NE1’s “Hate You” MV is Anti-Japanese

Last October, 2NE1’s “Hate You” music video was accused of depicting anti-Japanese sentiments. The accusations said the nuclear reactor in the clip looked similar to the Fukushima Nuclear Power Plant that was made inactive in March after the tsunami attacks last March. It also said the red dot on the white forehead of an evil monster that 2NE1 fights throughout the video was supposed to represent Japan’s national flag. As the accusations continued to grow out of proportion, the producer of the music video expressed his frustration on his homepage by writing, “I just cannot believe this… This is a global world in which content and cultural aspects are free to flow. I will leave these words to those who have a biased sentiment: hate you!”

Last July, Japanese actor Sousuke Takaoka wrote on his Twitter, “I don’t really watch channel 8 (Fuji TV) anymore. It sometimes makes me wonder if it’s a Korean channel. Japanese people want traditional Japanese programs. It feels like Korean programs brainwash you, and it really makes me feel bad. Broadcasters need to realize its negative effect.” He later apologized for the comment, but his agency had already terminated his contract for causing the controversy. However, a small group of his supporters held a street protest in front of Fuji TV (they broadcast the most Korean shows) for a group boycott of the channel.

A Japanese manga titled, “Disgusting Hallyu,” made headlines last year for the way it depicted Girls’ Generation and Kara, two of the biggest K-Pop girl groups in Japan. It was especially controversial for its drawings that clearly looked like the two groups serving old men with drinks and sexual favors. The cartoonist argued that it’s the norm in Korea for girl groups to offer sexual services to men in power and that the Korean government has been investing millions of dollars to manipulate this whole “Hallyu” phenomenon in Japan. SM Entertainment and DSP Media released statements saying they will take legal measures and file a lawsuit against the cartoonist.