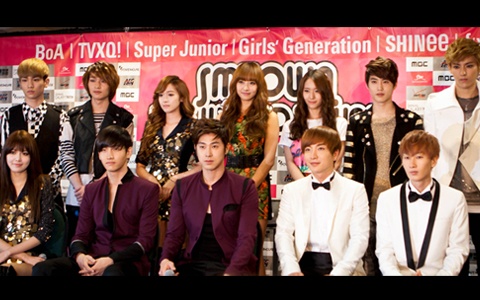 On May 20, SM Town officially kicked off their 2012 “Live World Tour III” in Anaheim, California!

Before the stars took to the stage, members of DBSK, Super Junior, Girl’s Generation, EXO, f(x) and SHINee sat down with international media outlets for a press conference.

Two members from each group were selected as representatives for the session: DBSK’s Changmin and Yunho, Super Junior’s Leeteuk and Eunhyuk, Girl’s Generation Jessica and Sooyoung, EXO leaders Kris and Suho, f(x)’s Krystal and Victoria, and SHINee’s Key and Onew.

The 30 minute press conference included a list of questions prepared by SM Entertainment for the artists to answer, and an open floor for questions from the press. The idols spoke of their thrill and excitement to visit the Los Angeles area again, and their ever-increasing international fame. Here are a few highlights from the conference below.

MC: You’ll be touring the SM Town Live World Tour III starting with Los Angeles, and then the rest with Seoul, New York, Paris, Tokyo, Shanghai, and other cities. How do you feel embarking on this new world tour?

Yunho: Just as this is our third time having this tour and concert experience, we hope to make it better than the past. We’ll work hard with our juniors, seniors, and staff!

MC: You just made your debut this year, and this is your first time being on SM Town’s live stage. As such, you must be feeling a whole lot. Do you mind sharing with us your feelings about being on this worldwide tour?

Kris: (in English) This is the first time for us to come out of Asia to meet our North American fans in person, so that is such an honor and we’re really happy to be in SM Town to perform. We promoted our teasers and music video through YouTube online. We never got to meet our fans in person, so this is a great chance. We’ll keep working hard. Thank you!

MC: How do you always manage to have an explosive reaction from your fans worldwide? What’s your secret?

Eunhyuk: (translated by MC) Maybe it’s because of their (Super Junior members) great good looks and image worldwide, and because they’re so handsome. The rest of his team members are handsome, and Eunhyuk thinks that he’s also handsome as well.

Press: Because K-Pop has become such a global phenomena, what formula and sort of things are required to keep K-Pop in that success?

Leeteuk: We would like to focus on providing more variety in the content of songs… More exciting, out-of-the-world performances will be needed to keep on having K-Pop continue. There are few people out there who think that K-Pop is going down, or the quality has gone down. That’s something all artists are working on together to always improve themselves and to have a better performance, and to not get tired, to keep K-Pop going forever and ever.

Press: Does Girl’s Generation have plans for solo concerts tour in States or other parts of world? For Jessica, are you aware that your family was on ESPN?

Sooyoung: As of right now, there is no further discussion (of a solo concert tour). Nothing has been confirmed yet

Jessica: (in English) I hope my fans aren’t really disappointed because I actually practiced a lot. I had fun first pitching.

Leeteuk: Eunhyuk had no idea what Jessica was doing (that she was pitching) until she pulled out something that looked like a baseball.