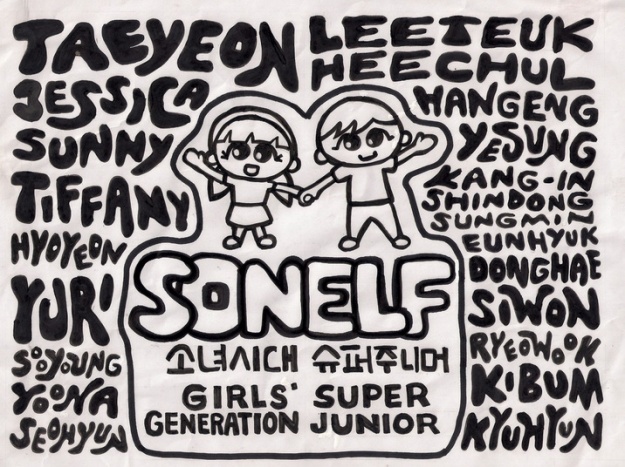 Fan Wars: Which Fan Club Are You?

This topic is so hard to start. Mainly because everybody gets hurt when you say something that might sound wrong but really deep inside of them, they know it’s true. And actually it took me weeks to think seriously what to say and not start a fight in here or hurt feelings. Try to keep your mind open and realize that when something’s wrong you just got to admit it or deal with the criticism. (I’ll base my opinion in fandoms that fight constantly and fandoms that support each other only.)

We all know fans care about idols A LOT. When you like a group, it becomes your eyes, your heart, everything you do goes around them, your love is unconditional and you even want them to be the number one in everything they do. But one thing I can’t understand is that why fans have to be fighting against each other all the time. Fans don’t seem to notice that idols don’t fight against each other. Have you ever seen your favorite group bashing others? No right? And that happens because they love and support another groups. As a matter of fact, idols are friends among each other. Why can’t their fandoms do the same?

Lately, there’s this strange rank that has been forming among fandoms. There’s the senior fandom that rules and it seems like untouchable. 800,000 souls made them gain that position. Just a number that keeps decreasing day by day due to the current situation with their favorite group. (Cassiopeia just in case you didn’t get it). Fans make it look like the senior fandom above all others. Therefore, you cannot say anything about their group whether if it’s good or bad (relating individually to JYJ or HoMin), you just can’t because you will have the red anger over you.

And why there’s this intern fight within them? Lately, Cassies have been spliting into three “categories”. Due to reasons we all know, Cassiopeias have turned into JYJ supporters, HoMin supporters and DB5K (five as a whole) supporters and since that incident, Cassiopeia is no longer 800,000+ fans. The last number achieved for this fanclub had 797,821 fans. (Maybe it proved that some didn’t deserve to be called “Cassiopeia” right?.)

Then after Cassiopeia there are other two fandoms that fight constantly against each other. One fandom says the other group gets more attention from their agency and the attacked fandom says that the situation is in reverse. (What to believe?). Their fight seems never ending. And lastly, there are the other two fandoms left, the small kids from the company that stay out of the senior fandoms issues and live freely. (ELF, SONE, Shawols and unnamed fan club for f(x) ).

YG fandoms in the other hand, are totally opposite. They love and support each other. VIPs and Blackjacks are powerful and can be considered senior and untouchable fandoms as well. Let’s say these two fandoms are the top ones in their agency. Their love and support is one of a kind. Blackjacks like and support Big Bang no matter what and VIPs do the same with 2NE1.

Then there are just the other fandoms left. Living freely and supporting peacefully their favorite group or artist. B2uties, Banas, Angels, Lucky Se7ens, Kamilias, BBCs, Kiss Mes, A+, Hottests, 4NIAs, Clouds… loving and not caring about anything else.

So the fandom fight is specifically with the first three. What’s wrong with these fandoms?. They all belong to the same family, from the same agency, why they have become so untouchable to the rest?. Well sad to say, like it or not, they are getting out of control. And people inside their same fandom say that sometimes they feel embarrased of being called, ELF, Cassie or SONE. (Is the situation really that bad?.)

And why do I say this?, cause lately the rivalry among them keeps increasing. Have you noticed that lately everything relates to ELF vs. SONE? Their never ending fight to prove who’s better? The online day and night voting to make their group the No. 1? Have you seen the results? There’s always Super Junior on the first spot, followed by who? yes, that’s right, Girls Generation. I’m not saying that every ELF in this world likes to fight with SONE, because there are ELF that love Girls Generation but when it comes to your beloved group, your fan pride makes you greedy.

And I’m not saying that ELF and SONE are bad either. And I’m not picking up on these fandoms only. Not at all. Both fandoms are totally dedicated to their favorite group. Their dedication and love is unique but what shouldn’t be existing, is that horrible hate and fight when it comes to polls, awards and prizes. Shouldn’t they be happy for another groups? or at least show appreciation? Well, to answer this question, let’s say that every fandom can be nice towards another but when it comes to winning something, friendship and appreciation stays under the table. Your fan pride comes first.

Wars are not only among ELF, Cassies and SONE… no fandom is a saint. The last fan fight happened at the Idol Championships when fans of ShinHwa ChangJo complained at BEAST‘s Yoseob for some slogans B2uties had to support Hyun Seung. B2uty didn’t like the fact that ShinHwa ChangJo’s fans picked up on Yoseob and the fight started. Also, do you remember the comparison fight among VIPs and BBCs for P.O‘s look a like with T.O.P., Zico‘s similar hairstyle from G-Dragon’s? or when VIPs started critizicing Chaos‘ Park Taeyang for having the same stage name as Big Bang’s Taeyang?. It seems that fans always find ways to complain about anything. 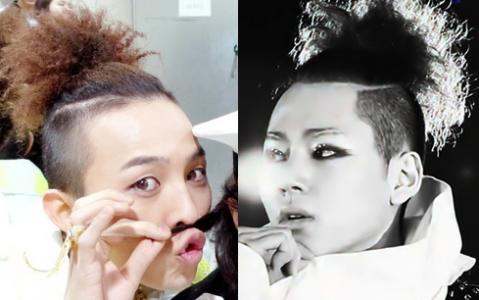 The worst is when fights start because you have to stand for your group. Remember the incident of U-KISS‘ producer against KARA? The bashing comments over Twitter? U-KISS’ leader, Soohyun, decided to take responsibility and apologized to KARA and their fans. KARA fans felt sort of relieved by his apology but Kiss Mes felt upset because they felt it wasn’t his responsibility to apologize for something he hadn’t done.

Or the recent rumor about Dal Shabet‘s Serri rejecting a B1A4 member who extended his hand in a friendly greeting. The rumour spread like wildfire and it got to the point in which police had to intervene because the hatred involved Darlings (Dal Shabet’s fan club) assaulting Banas (B1A4’s fan club) and had even, allegedly, raped and kidnapped the opposing fans. (Read more about this, here).

Or the recent BBC, Hottest fight over Twitter for the Block B behaviour in Thailand…..

Also, MBLAQ‘s G.O. got attacked over Twitter due to some misunderstanding with a prize and a tweet he wrote. MBLAQ’s fan club, A+ has an ethic code in which they are forbidden to speak bad or attack any other group or fan club. With this incident A+ was allowed to do anything they wanted just to defend G.O., but instead of insulting, A+ stood respectfully in the name of MBLAQ and the result came out pretty clean. A+ is the most pure and respectable fandom you can find. No wonder why MBLAQ’s members call them “A+ goddesses.”

And you just can’t call yourself a fan if you don’t speak up your mind about what you “think is correct” and what is not. But some fans take that role too seriously or even exaggerate it and act like if they were anti-fans instead. The famous netizens who tend to complain and demand things from idols like if it they owe it to the society. Demand death petitions, attack idols over Twitter, blogs, Me2Day for misunderstandings and mistakes that can be just forgotten to move on with life. Death petitions? how sick is this people?

Obsessive fans who cannot distinguish fiction from reality and demand absurd things such as “Nichkhun you have to get back with Victoria” or “Leeteuk you can’t say you have an ideal type while being married to Kang Sora” and even “Kyuhyun cannot get married with that Chinese actress cause he belongs to Sungmin“, (gamers went crazy with We Got Married’s valentine’s special).

Guys, seriously? can’t you tell the difference of an acted script from the reality?. Everything needs a balance, you can’t demand something just because you are a fan and you say so. (I think we all agree that the famous netizens are a bit crazy right? �de09 ). And sometimes, fans don’t realize that their comments cause more harm to their idol’s image instead of what the anti-fans do or say. 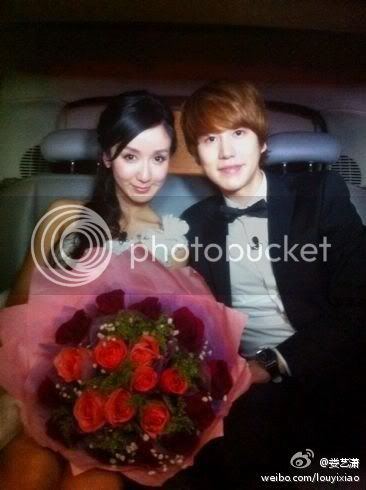 Taking the fights aside (and to finish this long article haha), fandoms have also strong and good points individually. Actually, I was very surprised when B2uty, ELF, A+, Hottest and many other fandoms joined forces and helped VIP to vote for Big Bang at the MTV EMA. And in the end it worked! Their union as a whole K-Pop fandom worked and made them win at an International Music Award. This kind of union is the one that we should be seeing more often. That love and support towards K-Pop.

Their unconditional love has gained them a very special place on the idols’ hearts. Fans are supportive and their love crosses borders, their love reaches anyone. Fans help, fans donate, fans act in the name of their idols for humanitarian causes and help people. Isn’t this kind of union better than fights and comparisons? 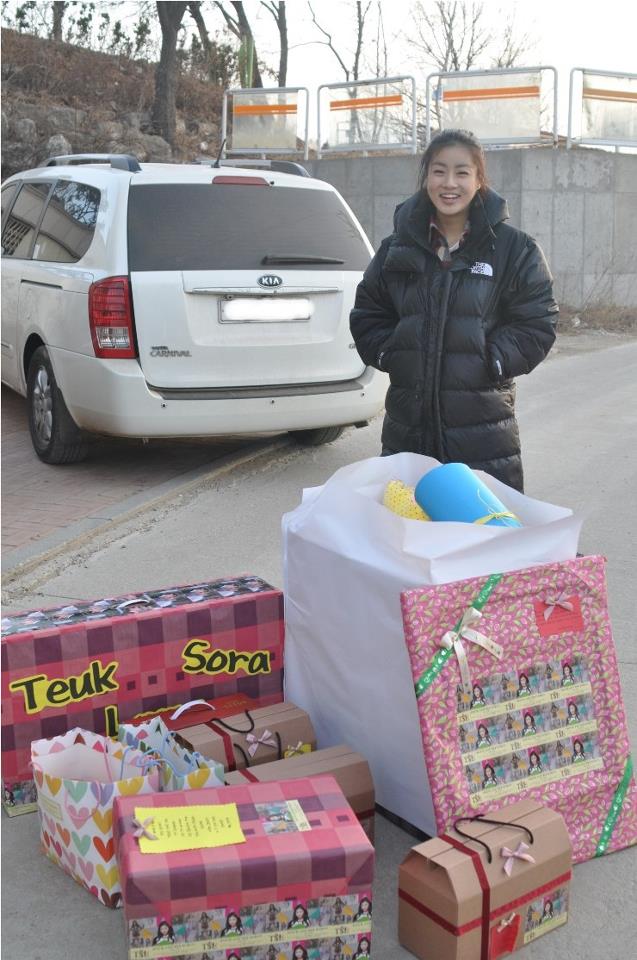 [Kang Sora with gifts from fans]

K-Pop fans, when will you stop fighting and understand that K-Pop is one big united family? When will you stop comparing groups and just enjoy their music and love you favorite artist like you don’t care anything else?. Don’t demand absurd things such as a death petition, don’t attack their families online, how sick do you guys look in front of other people’s eyes. That’s why sometimes idols avoid contact with fans, because they’re scared that they might get attacked for what they say or do. I guess you also need a bit of controversy to determine what kind of fan club you have, but don’t take that role too seriously and just be happy guys. Be happy…. that’s all.