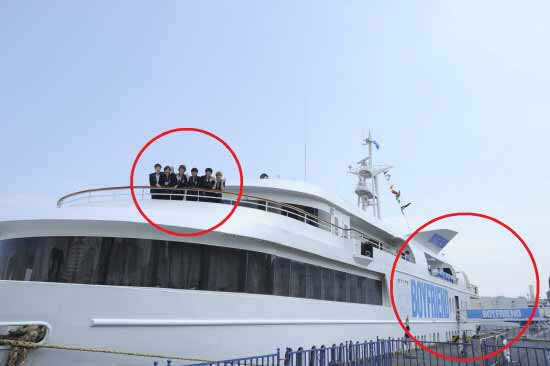 Boyfriend makes a grand appearance in Japan on board a cruise ship which has become quite the topic online.

Through the group’s official Twitter photos were shared of the Boyfriend members standing on the massive sized cruise ship which had their group’s name plastered on the side of it. The group held their first press conference aboard a cruise ship where they met the Japanese media.

The ship itself weighed in at 1084 tons and measured 70 meters long and 10.5 meters wide. It was decorated with images which helped to advertise the group. If the ship weren’t impressive enough, this marks the first time a Korean artist had utilized such an immense vehicle to announce their debut in Japan.

Boyfriend will host their first Japanese showcase, which is being called, “First Date with Boyfriend in Japan” and is scheduled to take place on June 30 at the famed Nippon Budokan. It is rare for a group who has not made their official debut in Japan to hold a performance at the Nippon Budokan. This just confirms the interest and anticipation the Japanese people have for Boyfriend’s debut.

Boyfriend commented saying, “We are very honored to be holding a concert at the Nippon Budokan. We will try our very best to give you an amazing performance.”

On June 6 Boyfriend plans to release a special Japanese album entitled, “We Are Boyfriend.”

Boyfriend
Japan
Press Conference
twitter
We Are BOYFRIEND
First Date With Boyfriend
Nippon Budokan
cruise ship
How does this article make you feel?