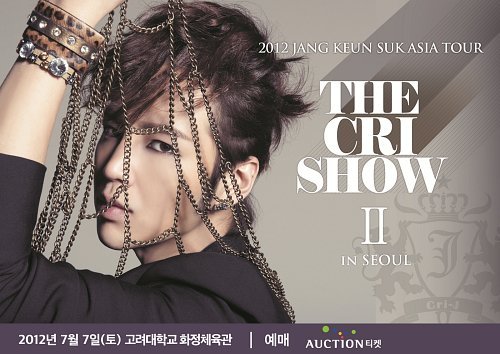 Hallyu star Jang Geun Suk will start his big tour, “2012 Jang Geun Suk Asia Tour THE CRI SHOW 2” on July 7, in Seoul. With the news about the tour starting in Seoul, the excitement is growing by the advanced ticket purchases made by the fans in Korea, of course, and in other parts of Asia. On June 14, ticketing will be opened and sold at Auction. It will be opened for overseas on June 18.

This is the first time that Jang Geun Suk is opening his big Asia tour in Seoul. In order to show a more upgraded performance than the Asia tour he had before, he put all his heart and soul into this tour. He is gaining much anticipation because of his enthusiasm to show everything he has at the Seoul concert, which is a special place to him.

At this tour, he will be singing songs from his Japanese album, “Just Crazy,” which was number one on Oricon’s daily and weekly charts. He will sing the title song, “Crazy Crazy Crazy,” along with other songs like, “Abracadabra” and “Stay.” The songs are barely heard in Korea, which is why it is being believed that it will be a special concert for the fans in Korea.

Jang Geun Suk’s Asia tour will have its first concert in Seoul and then in four cities in Japan. They are Yokohama, Osaka, Nagoya, and Fukuoka. Then, he will continue his tour in four places in China and Southeast Asia. They are Shanghai, Simcheon, Taiwan, and Thailand.