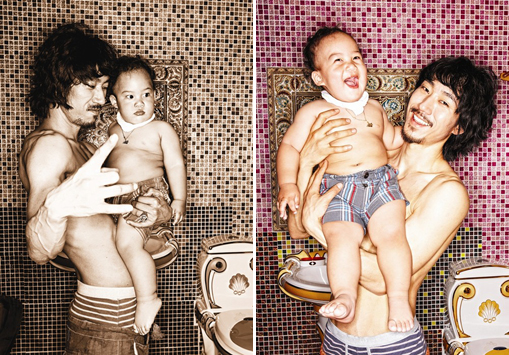 The third Sunday of June marks Father’s Day, the day to celebrate our dads and show them our appreciation. This year, Father’s Day falls on June 17, which means it’s time for us to acknowledge and thank all the dads out there!

There’s a large group of caring dads in the Korean pop industry as well. Better known as “son-idiots” or “daughter-idiots” for their devotion and commitment to their children, these celebrity fathers have proudly expressed their unconditional love for their children in public.

In honor of all the famous fathers celebrating Father’s Day this year, we’ve rounded up some of the best-known dads in the Korean entertainment industry. Click through the list and make sure you say thank you to your dad too! (Please let us know if we missed anyone!)

After getting married to his long-time friend and star actress Go So Young in May, 2010, Jang Dong Gun got his first son Min Joon just five months later. Jang Dong Gun recently said in an interview, “Before having a child, I didn’t care if I was away from home for 5-6 months. But now, even if I’m away for a few days, my kid’s face keeps coming up in my head.” They haven’t revealed the face of Min Joon to the public yet, but from the looks of his parents, we’re pretty sure he’s born with the right genes!

Kwon Sang Woo surprised many by announcing his marriage to Miss Korea-turned-actress Son Tae Young in 2008. The star couple gave birth to Rook Hee the following year, and the three have been spotted together several times by paparazzi photos. They are still one of the most popular celebrity families in Korea, and their every move continues to attract massive press attention. In February, Rook Hee’s 1st birthday photos were released to the public, and even though the photos were two years overdue, it made headlines on most local papers, proving their unceasing popularity.

Yang Hyun Suk has one daughter and one son between him and his wife, Lee Eun Joo. After giving birth to their first daughter Yoo Jin in 2010, Yang Hyun Suk made a surprise announcement during the April 29 episode of SBS “K-Pop Star” that his second kid is a son. Later, during an interview with SBS “Healing Camp,” Yang Hyun Suk said that his son’s name is Seung Hyun and that he hopes him to be his successor for YG Entertainment’s leadership position.

Sean, the former rapper of YG Entertainment’s first hip hop duo, JinuSean, has now completely turned his career into a full time philanthropist, spreading and preaching the benefits of helping others. But he’s also well-known for his desire to have many children, as he already has four children with his wife Jung Hye Young. All four children have names related to God (with meanings of God’s Heart, God’s Love, God’s Law, and God’s Angel), and it may not take too long until we see their fifth child!

Tiger JK is married to fellow rapper Tasha, and they have a son named Jordan between them. After giving birth to Jordan in 2008, Tiger JK released a single dedicated to his son, titled, “Congratulations,” which actually featured Jordan in the song. Recently, the family made an appearance on KBS “Win Win” recently and showed off Jordan’s freestyle and breaking skills, impressing many fans that are already anticipating the next best rapper in the making. It was also revealed that Jordan left a strong impression on Black Eyed Peas’ Will.I.AM at a concert in Korea. Who knows, we might soon get to see Tiger JK collaborate with his son in his new album!