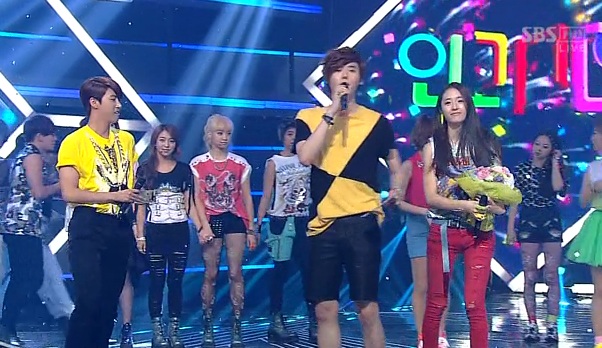 f(x) Krystal’s quick hands have left netizens in awe after her agility was on put on full display during the latest episode of SBS “Inkigayo.”

On June 24, Krystal appeared as a special MC for “Inkigayo,” alongside Lee Jong Suk and ZE:A’s Kwanghee. As the three MCs headed over to center stage to announce the winner of this week’s “Mutizen Song,” Krystal almost dropped the bouquet of flowers as it slipped from her hands. But the 18-year old singer/actress quickly caught the flowers and prevented it from hitting the floor – and gave a proud smile at the camera as she salvaged the celebratory prize for the “Mutizen Song” winner.

Netizens who saw the show commented, “Krystal is so quick! Is it because she’s a dancer?” “I love that final look,” and “I would have loved to see her pick up that flower from the floor.”

(Watch the clip of the incident here!)