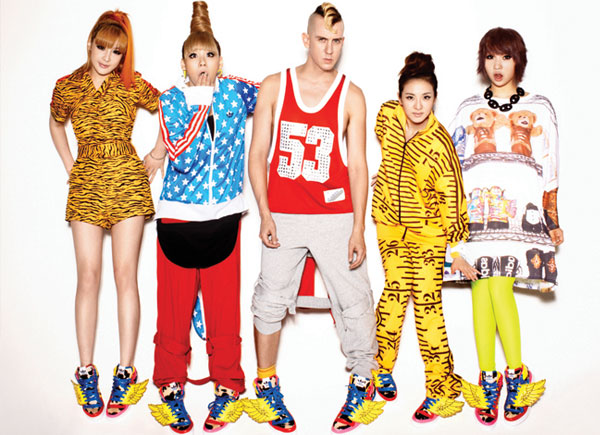 Internationally renowned fashion designer Jeremy Scott, and close friend of 2NE1, will be designing the stage costumes for the group’s first world tour, “NEW EVOLUTION,” which will kick off on July 28 and 29 in Seoul. Unlike other designers who usually support the event by sponsoring their clothes from their existing collection, Jeremy Scott will be personally designing new and original clothes for 2NE1 and their backup dancers.

The clothes 2NE1 is seen wearing in the poster for their upcoming tour are also Jeremy Scott’s masterpieces from his 2012 fall/winter collection. The clothes were specially flown in for the poster photoshoot.

The world tour will start in Seoul, South Korea, and will stop in ten cities among seven countries located in Asia, the Americas, and Europe. “NEW EVOLUTION” will open at the Olympic Gymnastics Stadium at Olympic Park in Seoul on July 28 and 29 at 6PM KST. Tickets for the Seoul concerts will be available on Gmarket starting today, June 26, at 8PM KST.

2NE1
Jeremy Scott
KPLG
new evolution
How does this article make you feel?