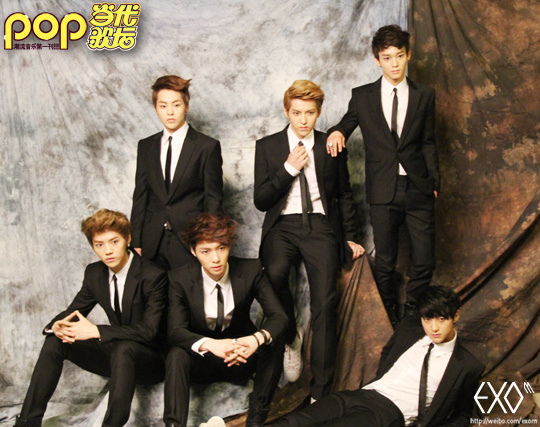 The six Chinese members of SM’s new group, EXO-M, have been keeping busy lately. Earlier this month, EXO-M finished up their concert in Taiwan and then the group was in attendance for stops on the SMTOWN Live World Tour. During this time they were somehow able to participate in various photo shoots. They continue to lead the way for the Hallyu Wave in China with one of the shoots in particular, which was for the June issue of the Chinese magazine, “The Journal of Contemporary Pop Music.”

Earlier, the group’s official Weibo made an announcement to fans about their upcoming magazine appearance. With the announcement, a few teaser photos were released, in which the six members looked charming in their black suits.

A post made to the magazine’s Weibo read, “In order for us to provide you with enriched content, the magazine editors worked day in and day out, night and day. Now the 537th issue of ‘Contemporary Pop’ has finally been printed! As it was being printed, the ‘Contemporary Pop’ staff burst into tears of joy. Those who are fans of EXO-M, be sure to hurry down to your local newsstand for the magazine is ready to be published. ‘Contemporary Pop’ will post many surprises as we countdown for the official release, we couldn’t let you guys wait all by yourselves, of course what we reveal at the end will be the biggest and best surprise~.”

One of the latest treats for fans is a special behind-the-scenes video of the boys interacting during the photo shoot. Fans that saw the video reacted positively saying, “Kris is so handsome with his invincible smile. I’m dead,” “So fine! Tao’s eyes are sharp ah~,” “The stars! Love love love!!! Will support you ‘til the end,” and “Their looks could kill! Well, no matter they are just so cool. Protect your hearts girls.”

Check out the candid making video as well as some of the photos from the shoot. What are your thoughts?

Behind the scenes
EXO-M
photo shoot
video
photos
How does this article make you feel?