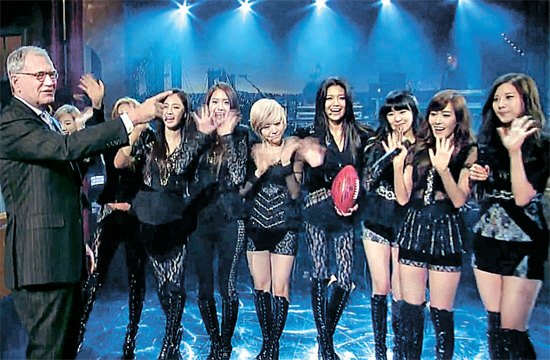 Most Popular/Controversial Stories from the First Half of 2012

It’s already July and that means we’re half way through 2012. Over the last six months, we’ve seen tons of news stories pop up in the K-Pop industry, and we wanted to take the time to round up some of the most popular and controversial stories from the first half of 2012.

Some of the stories made us proud, while some were just outright ridiculous. We saw some new celebrity couples, but some of the scandals also turned out to be false. It was hard to trim down the list, but we’ve been able to put together eight of the most popular and controversial stories from the first half of this year.

We have the good, the bad, and the ugly news here altogether – enjoy the list and please let us know which one you liked/hated the most!

Girls’ Generation Performs on “The Late Show with David Letterman” and “LIVE! With Kelly”

On January 31, Girls’ Generation made all of us K-Pop fans proud of the culture by performing live on “The Late Show with David Letterman,” one of the most popular and influential late night talks shows in the U.S. The following day, the girls performed again on “LIVE! With Kelly,” and spoke fluent English in front of millions of the mainstream American audience, which later made Kelly Ripa say in awe, “That was amazing! I’ve never seen such audience participation in my life!”

The two events marked the official start of Girls’ Generation’s stride into the U.S. pop music scene, and we expect to see more SONEs from around the world!

They were spotted dating, going shopping, and having dinner together. At one point, they even had their arms around each other – but it was just two close friends hanging out together. Or at least that’s what they say. Shortly after paparazzi photos of the two dating were released online, JYP Entertainment made an official statement denying their dating rumors, saying, “They are simply close friends and nothing more.” Seulong and Sohee also denied the reports multiple times in public, but the hardcore fans are still speculating something is indeed going on between these two hot stars.

We all saw this coming one day. Kim Gura, best known for his sharp tongue on TV, was found to have made a silly comment on his own webcast show more than 10 years ago – he basically compared comfort women to prostitutes. In a country where comfort women-related issues are highly sensitive, Kim Gura probably shouldn’t have made that stupid comment. But to accuse him of something that’s happened more than a decade ago – not to mention on his own webcast show – and force him to suspend all TV activities, we feel like it’s a bit of a stretch. Either way, he must be reflecting on himself and hopefully he’ll realize it’s not good for his career to make fun of national issues.

Big Bang is Back!

After a controversial year in 2011, Big Bang finally made its comeback with their “Alive” album in February. Starting from “Blue,” all six tracks on the album were smash hits, including “Bad Boy,” “Fantastic Baby,” and “Ain’t No Fun.” Their fifth mini album, “Alive” was the highest selling CD in Korea, with nearly 270,000 copies sold. It later led to the group’s mini album release in June, titled “Still Alive,” making Big Bang easily the most popular and top headlining artist in the first half of 2012. Big Bang will probably spend the rest of the year on the road, as they will be embarking on their first-ever world tour concert on July 21.

Until this interview happened in February, Block B was one of the fastest rising stars in K-Pop. But the young idol group took a huge hit to their popularity when they made derogatory comments about the Thai people, when the entire country was suffering from a massive flood. During the whole video interview, Block B members foolishly goofed around, not taking any of the questions seriously, and later made fun of the financial situation of Thailand. After the video spread online, 2PM’s Nichkhun expressed his feelings through Twitter, “As a Thai person, I feel offended by those who speak about the Thailand floods without thinking.” The problem grew out of hands within a couple days, and even until now, Block B has not been able to make a comeback.

In early June, Ji Hyun Woo brought shockwaves to the whole industry when he confessed to Yoo In Na in front of thousands of fans at the special fan meeting event for tvN drama, “Queen In Hyun’s Man.” During the event, Ji Hyun Woo said, “I wanted to make this confession in front of the fans who enjoyed our drama. I sincerely love Yoo In Na.” At first, Yoo In Na seemed to deny all dating rumors, but a couple weeks later, she made it official by saying on her live radio show, “Since ‘Queen In Hyun’s Man’ is over, let’s do “Yoo In Na’s Man’ now.” Their relationship attracted more attention because the two first appeared as an on-screen couple before taking it to real life. In case you missed it, here’s a list of many more celebrity couples who have met while working together on dramas!

JYJ and the Sasaeng Fans

In March, local media Dispatch released an audio file of JYJ verbally and physically abusing sasaeng fans (If you don’t know what sasaeng means already, check out the list of what they did to JYJ here). In the released audio files, you can hear Jaejoong and Yoochun swearing at the sasaengs, and at one point, you get to hear sounds of Jaejoong physically hitting the fans. Although the audio files were never directly addressed by JYJ members, they did open up about the issue, explaining how hard it has been for them to endure the pain for the last eight years. They did apologize for their unjust behaviors during the press conference, but really, it’s hard to say who the victim is in this case.

Jenny Hyun, the songwriter behind Girls’ Generation’s “How Great Is Your Love” and Chocolat’s “One More Day,” posted over a dozen racially derogatory comments on her Twitter, aimed at African-Americans. Her racial barrage seemed to have all started from U.S. boxer Floyd Mayweather’s tweet about Asians and the Taiwanese-American basketball player Jeremy Lin. She first called him an “ungrateful APE,” and later went on to use words such as “disgusting,” “Neanderthal,” “slavery” and “leeching.” Even though K-Pop fans sent her messages to stop the rant, she took her anger to her personal blog to worsen the problem. A few days later, however, an apology letter was posted on her personal blog, explaining that she was sent to the hospital because she’s paranoid schizophrenic, an illness she’s been battling for years.

Whatever the case is, Jenny Hyun dug herself into a big hole, and possibly just ended her songwriting career. No matter how many times she apologizes and begs for our understanding, the amount of suffering and hatred she caused through her racially abusive tweets will not be easily cured.