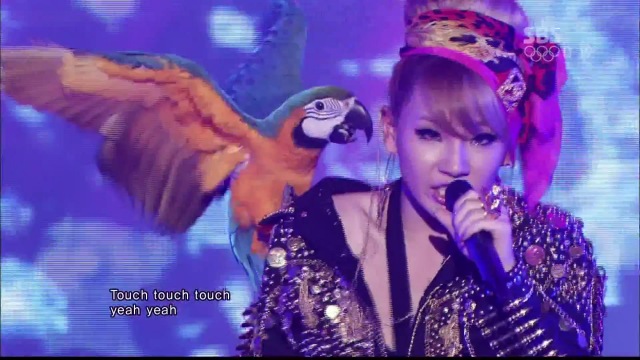 2NE1, who has recently made a come back, has been involved in an animal abuse controversy. YG Entertainment has spoken up to issue an explanation along with an apology.

2NE1 held their first come back stage on “Inkigayo” on July 8 and performed their new track, “I Love You.” During the performance, a swan entered the stage and CL performed while having a parrot on her shoulder.

Kim Hyun Sung, the editor-in-chief of a environmental magazine, “Oh Boy,” posted on his Twitter, “They put a live parrot on their shoulders and used a swan as a stage prop. They are great musicians but I really hope they won’t do that for their next performance.” He pointed out that animals can get stressed due to the heat of the lights and the strange and unfamiliar setting.

Even netizens who saw the performance commented that although 2NE1 is a unique group, their performance involving the birds was a bit “too much.”

YG Entertainment stated, “At the time, a professional animal keeper was hired and we continued our plans while receiving his advice. Our intention was to show you a good performance but it seems like we made some people uncomfortable so we apologize. We will be cautious of this matter from now on.”

Check out 2NE1’s come back performance of “I Love You” here.

2NE1
SBS Inkigayo
YG Entertainment
KPLG
I LOVE YOU
How does this article make you feel?