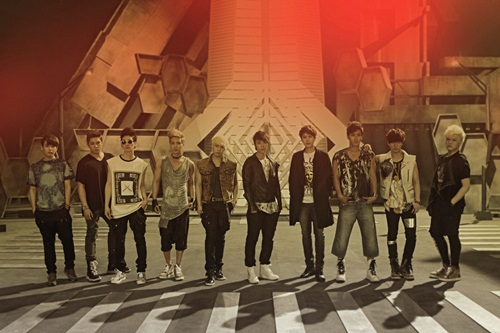 13 Artists to Keep an Eye on This Month

Forget about the summer – July is shaping up to be a hell of a month for K-Pop!

We’ve seen some of the top K-Pop acts come out with new songs this month, including Super Junior, 2NE1, T-ara, Wonder Girls, and 2PM’s Wooyoung, just to name a few. The list is only expected to grow over the next few weeks, with more new releases already lined up. With so many top musicians promoting at the same time, July is already set to be one of the hottest months K-Pop has seen in years.

Check out our picks for 13 artists you need to follow this month! Whose comeback are you enjoying/anticipating the most?

(Scroll through the list by clicking the arrow on the bottom right!)

Super Junior came back with their sixth regular album, “Sexy, Free & Single,” on July 4. It’s already swept most online charts with the title track under the same name, “Sexy, Free & Single,” while its music video surpassed the half a million view mark in less than a week. This album, in particular, holds special meanings because it’s Leeteuk’s last album before enlisting in Korean army later this year, and it’s Kangin’s comeback album from his two-year mandatory military service. Make sure you order your album at Soompi Shop here!

2NE1’s latest single, “I Love You,” was released on July 5. Shortly after its release, “I Love You” quickly achieved an “All-Kill,” dominating online music charts like any other 2NE1 single usually does. But this track is slightly different from 2NE1’s previous tracks because of its lyrics and musical style. It’s perhaps the first time we’ve heard 2NE1 beg for love in their song, while it experiments with a fusion of electro beats and Korean traditional trot music. Make sure you check out our exclusive review of the song here too!

T-ara added two new members for their 9th mini album, “Day by Day.” Their 8th member Areum will be part of all of their album promotions, while Dani, their maknae member, will only appear in the music video for this time (she’s expected to join the group later this year). “Day by Day” attracted more attention for having Jonte, best-known for being Beyonce’s choreographer, design all the choreography.

2PM’s Wooyoung released his first solo album, “23, Male, Single,” on July 8. The album comes with a total of seven tracks, including the title song “Sexy Lady” and two songs written by Junsu and Junho. “Sexy Lady,” which apparently is supposed to signify his “fans,” is a powerful dance track with electronic beats. This album may be the first of many to come, as Wooyoung has expressed his desire to continue learning how to write songs and produce albums.

SISTAR’s summer special album, “Loving U,” was released on June 28, but it’s been one of the most popular songs this month. Unlike SISTAR’s previous singles, which had more of a darker sound, “Loving U” is SISTAR’s first try at a more “girly” pop dance track. Their choreography still puts a lot of emphasis on their “butt,” and the girls look hotter than ever, so you should definitely check out the song before they end their promotions!

Wonder Girls’ new single, “Like Money,” has been one of the most anticipated songs this year because of U.S. rapper/R&B singer Akon’s involvement. Akon didn’t just feature in the song, but he also appeared in the music video, and is also expected to join the girls for their future U.S. promotions. It’s another electro pop dance number, but it gives Wonder Girls a completely different look from their last single, “Like This.”

Much talk has been going on about this upcoming girl group produced by FNC Entertainment. Perhaps it’s because they’re managed by the same agency as CNBlue and FT Island, but also because they’re going to have Sul Hyun, the girl that appeared alongside Lee Hongki in FT Island’s MV for “Severely.” There’s not much information is out about this group, but we’ll find out more when the teaser site opens on July 13!

BEAST just announced today that they will be coming back with a new album later this month. It was recently reported that the group had traveled to New York City to film their new music video, but everything else is pretty much unknown. This is BEAST’s first album in nearly 14 months, so we expect to see some major changes to their musical style.

SS501’s Kim Hyung Jun is back with his second solo album “Escape.” The title track, “Sorry I’m Sorry” is a sweet K-Pop dance track, featuring catchy dance moves that you’re going to love. Kim Hyung Jun said he’s dropped 8 kg for his solo activities and it definitely shows in his toned down body.

LEDApple released their new mini album, “Run to You,” with the title track under the same name. This up-and-coming group looks to continue its growth with another hit track that would serve as a follow up to “Time Is up” and “Sadness.” They chose a “marine-look” for their new single, and we’re totally loving the new look. But unfortunately, this will be the last promotion for LEDApple’s resident songwriter, Gun Woo, who’s decided to withdraw from the group to focus more on his songwriting career.

On July 10, Brown Eyed Girls released the first teaser image to their upcoming album. The teaser only showed the group members’ silhouette, with the album’s title “The Original,” and “D-7” written in large fonts. This will be their first album in nearly 8 months. Stay tuned for more updates!

APink, who’s had a successful debut with “Hush,” looks to continue their ascension with their second single, “BUBIBU.” The seven member girl group left a strong impression with “Hush,” and “BUBIBU” is expected to bring in similar results. It has a lot of cute melodies and lyrics, as well as the trendy synth beats, making it a perfect song to enjoy in this weather.

Park Jin Young announced late last month that he would come out with a new project song, featuring miss A’s Suzy, 2PM’s Wooyoung, and Nichkhun. The project, run in collaboration with sports brand Reebok, will involve a new song and a new music video. The U.S. hip hop/R&B producer Swizz Beatz was also present at the press conference for the project, hinting at the possibility of a new collaboration, so stay tuned for the song’s release later this month!