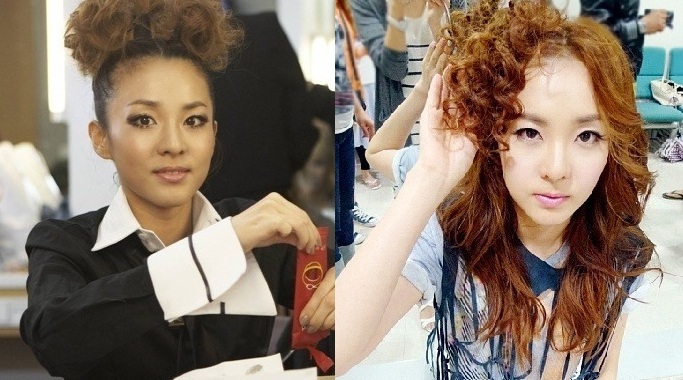 Earlier this week, 2NE1’s Dara revealed that she’s shaved her hair for the fourth time during the “I Love You” promotions. A few days before that, she shared her younger brother Thunder’s (MBLAQ) response to her latest half-shaved hair.

2NE1’s Dara is perhaps the most daring K-Pop star when it comes to changing hairstyles. From her trademark “palm tree” hairstyle to last year’s Vegeta hairstyle, Dara has shown that she’s definitely not afraid to take a risk with her hair. She’s a hair chameleon that never plays it safe, and we wanted to take our time for a special round up of her most creative hairstyles!

Click through the list and make sure you tell us your favorite Dara hairstyle in the comments section below!

Her “palm tree” hairstyle was sensational in 2009 when 2NE1 debuted with “Lollipop” and “Fire.” It was one of the most radical, yet stylish hairstyles we’ve seen in a while and multiple celebrities came out with different variations of it after her.

In this oddly stylish hair, Dara made a slight change to her wildly popular palm tree style by adding curls to the end. At first glance, it almost looks like a semi-fro, and with her slightly tanned skin, she looks absolutely hot!

This photo was taken in 2011 during 2NE1’s “Nolza” promotions in Japan. Dara rolled up her hair on both sides, which was later nicknamed “dumpling” hairstyle.

Dara sported the “apple top” hairstyle pretty often in 2011. It’s called “apple top” because the tied up hair looks like the top of an apple!

A hybrid of the original “palm tree” style and a regular braid, Dara’s “twister” style earned its nickname for its similarity to the popular Korean “twister” bread.

This was used during 2NE1’s “I Don’t Care” promotions, but the name of the hair is still unclear as it’s called either “grape” or “poodle” style for the short, curly part.

More commonly known as the milkmaid braid, Dara made this semi-braid style a megahit among K-Pop aficionados a few years back. It’s also called the “rice plant style” for its resemblance to, well, rice plants, but its simple yet stylish nature will make it a must-do hair for any female K-Pop fan for years to come!

The front bang is probably one of the most popular styles among Korean students, but celebrities rarely go for it. If you don’t style it well, you could end up looking like a little kid, or your face could look disproportionately big. Dara, however, being the style icon that she is, measured the front part perfectly and the style absolutely looks good on her round, oval face.

It was an absolute stunner when Dara first showed up with this hair for “I Am the Best.” With her long hair all gelled up to the top, Dara looks strikingly similar to the “Dragon Ball” character, Vegeta.

Dara’s latest creation, the “half-shaved” style, is the hairstyle she’s donned for the “I Love You” promotions. Perhaps the most radical style we’ve seen from her, the half-shaved hair is quickly becoming a trend among young Korean women. It was a risky move, but Dara totally nailed it and she looks hotter than ever in this new style!

Dara’s not just a great hairstylist, but she knows how to work those hats! From New Era caps to basic beanies, Dara can make any type of hat look perfectly good on her!

Which Dara hairstyle do you like the best? Please let us know if we missed any of your favorites!

2NE1
Dara
I LOVE YOU
i don't care
vegeta
How does this article make you feel?