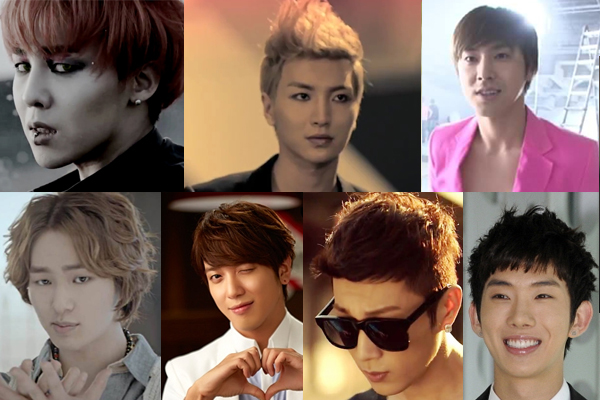 A list of idol leader’s occupations has become a hot topic. Recently, an online community bulletin board posted a thread titled, “Male Idol Leaders Occupations Based on Their Looks.” The post used their attractiveness to determine their jobs instead of their real occupations.

The list’s description of Super Junior’s Leeteuk was “He is a very eloquent speaker. So he would be a famous language teacher at school. During the day he would teach five straight hours of classes and would still manage to have a lot to say.” This role made sense as the leader was previously an emcee on various variety shows.

Leader of Big Bang, G-Dragon, was described as,“the leader of a dance society at the nearby school.” SHINee’s Onew was “the representative of our department because he is kind and innocent.” 2AM’s Jo Kwon, “A close colleague who attends all the school events and talent shows.” Beast’s Yoon Doo Joon was nominated as “a physical education teacher.” CNBlue’s Jung Yong Hwa was referred as “the handsome oppa from church.” DBSK’s Yunho “would capture the hearts of housewives and customers money as he would be the rising young local supermarket manager.” SS501’s Kim Hyun Joong “would assist senior citizens.”

Netizens who read the post reacted: “It does seem possible…,” “It is so funny how I don’t have trouble imaging them in these roles,” and “It is so hilarious!”

Based on the leader’s appearances what careers do you feel they are qualified for?