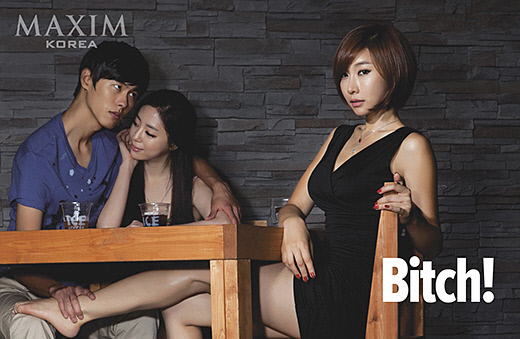 The “Banana Girl” Kwak Hyun Hwa strikes again! This time she took part in a “Bitch” concept photoshoot for the August edition of “Maxim.”

Kwak Hyun Hwa stated, “I really like the Bitch concept. I bet a lot of people will think that this is a beach photoshoot.” (Because bitch and beach sound very similar.)

In August the movie that she appears in “A House With a Good View” will be released. About the film she stated, “I appear in an all-nude scene, although it is only my back.”

She also talked about her recent “banana” incident. (She had tweeted a picture of herself eating a banana in a provocative way.) “South Korea is still very rigid. South Korea lacks the understanding to accept the freedom of sexual imagination and other people’s expressions.”

The editor asked Kwak Hyun Hwa, “Aren’t you tired of the criticism?” Kwak Hyun Hwa answered, “At first it didn’t feel good but now I don’t care. Whether the other person is right or I am, at the end of a fight the ending is never good. However I am sorry that I made my parents tired. My father even says ‘Hmm, Banana.’”

The editor then asked, “I heard there was a rumor going on that you got breast enlargement surgery?”

Kwak Hyun Hwa replied, “I didn’t. They are natural. Touch them!”

Kwak Hyun Hwa
KPLG
Maxim
How does this article make you feel?