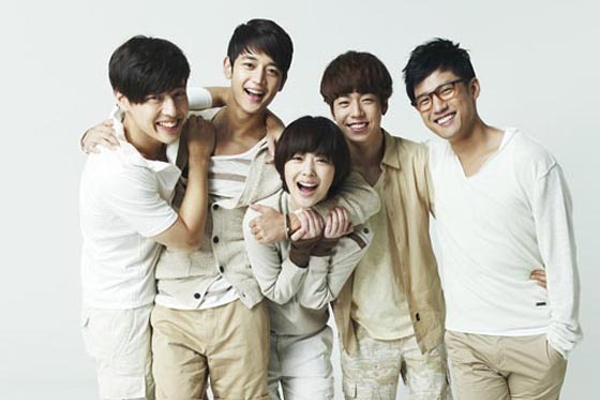 Officials for SBS’s upcoming drama, “To the Beautiful You” released the series’ promotional poster on which the main cast appeared.

“To the Beautiful You” features a cast of hot stars such as f(x)‘s Sulli, SHINee’s Minho, Lee Hyun Woo, Kim Ji Won. They will experience the innocence and passion of teenage love as they work hard to achieve their goals. This cast is expected to fill viewer’s homes with their fresh, youthful energy.

Other familiar faces stood-out in the crowd they were recognized as the members of EXO, ZE:A member Kwang Hee, and Infinite‘s L.

The poster reveals the main cast of 21 handsome men, yet it is Sulli in the middle attracting attention. She is wearing a short men’s haircut and dressed in the school uniform. Sulli is comfortable sat among all the attractive men sporting the appearance of a flower boy. She was able to fit right in among the rest of the cast proving she is ready for this role.

The photo shoot for the poster took place earlier this month at a studio in Gangnam.

A staff member commented, “Despite the high expectations surrounding this drama and the large number of the cast we were able to maintain a positive atmosphere. We are determined to not just provide every candy, but to have a strong, compelling storyline along with beautiful production to make this as close as we can to a perfect drama.”

The drama is an adaptation of the popular Japanese manga “For You in Full Blossom” (more commonly known as “Hana-Kimi”). The story follows Kang Tae Jun (played by Minho) a gold medal high jumper who after suffering an injury finds himself in a slump. Koo Jae Hee (Sulli) disguises herself as a male transfer student at an all-boys high school in order to help her idol Kang Tae Jun.

“To the Beautiful You” is set to premiere on Wednesday, August 15 at 9:55pm on SBS. New episodes will air every Wednesday and Thursday.

Be sure to check out the poster along with the second teaser video below.