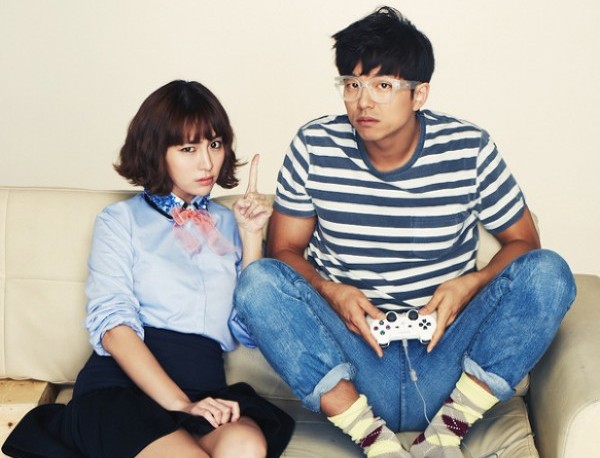 On July 26, the official website of KBS “Big” revealed a behind-the-scene making film clip titled “Kyung Joon’s Dash to Daran’s Fishery.” The revealed clip shows the filming of a scene from the last episode of “Big,” where Kang Kyung Joon (played by Gong Yoo) and Gil Daran (played by Lee Min Jung) are reuniting secretly without their families knowing. In this scene, Gil Daran put the watch, which symbolizes her love, back on Kang Kyung Joon’s wrist and kissed him on the cheek. After their short rendezvous, Kang Kyung Joon watched Gil Daran going back into her house, looking happy and content.

During filming, Lee Min Jung and Gong Yoo made jokes and playfully fooled around to brighten up the atmosphere. When Lee Min Jung struggled to put the watch on his wrist, Gong Yoo joked, “I’ll put it on. Clearly, you’ve never seen a watch this expensive.” However, the struggles didn’t stop there. Gong Yoo and Lee Min Jung kept making mistakes in “kissing on the cheek scene,” and Gong Yoo humorously shouted, “Yes, let me be kissed all night long!” Moreover when he kept making mistakes in filming the scene where he looks happy after receiving a kiss on the cheek from Lee Min Jung, Gong Yoo reproached himself, “Ji Chul (Gong Yoo’s real name), please act. Act! What is wrong with me?” His cute self-criticism made everyone at the filming set burst out into laughter.

The author of the post of “Big”s official website commented on the revealed video clip, “What a nice fishery owner Ms. Gil Daran. She’s worried that the fish might dry up and die, so she puts a watch on him and kisses him a whole a lot! Nice fishery manager Gil Daran and a hopeless fish in Gil Daran’s fishery, Kang Kyung Joon. Hey, Kyung Joon!!! Are you acting or just enjoying what is going on for real?”