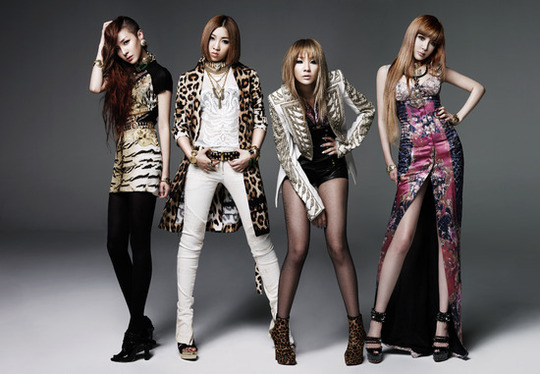 2NE1 is no stranger to setting new trends. Ever since the group’s debut, it has raised the bars for all other debuting artists. 2NE1 is also the first group to have multiple title songs on one album and promoting the songs simultaneously. Now adding to their young and already impressive resume is a chart topping digital single. Congratulations.

The rise of “I Love You” to No. 1 pushed the other three contenders down one spot each from last week. Sistar’s former No. 1 song “Loving U” is at No. 2. There are a lot of loves on our chart as the top two songs are titled “I Love You” and “Loving U”. �de00

Down one spot to No. 3 is T-Ara’s “Day By Day”. All top three songs have a score of over 900 points, proving that the battle for top is very fierce. Also down one spot to No. 4 is Super Junior’s “Sexy, Free & Single”. While this song dominates on TV networks and airplay, it has struggled to gain popularity on independent chart sources and internet rankings.

The four way battle for No. 1 will become a five way battle next week, as a surprise new contender emerges. Moving up a giant 43 spots to No. 7 this week is Psy’s “Gangnam Style”. This song has actually outperformed all four idol groups’ songs last week on almost all the internet charts. Fans outside of Korea and younger generation K-Pop listeners may not be too familiar with Psy but he is very popular in Korea among fans of all ages. His hilarious style of hip-hop music is always fun to listen to and he is always performing funny dances on stage which is a treat to watch. “Gangnam Style” is the title song from Part 1 of his sixth album. This is Psy’s first release in two years. “Gangnam Style” is written by the singer himself. It has addictive beats and the lyrics are about penetrating the foundations of modern philosophy. The music video has many guest stars, including 4Minute‘s Hyuna, Yoo Jaesuk and Noh Hongchul.

2PM member Jang Woo Young has his first solo top 10 hit with “Sexy Lady”, moving up 11 spots to No. 8. This song is coming from Jang Woo Young’s mini-album “23, Male, Single”. Written by JYP, “Sexy Lady” is an addictive electronic number about getting hypnotized by a sexy woman.