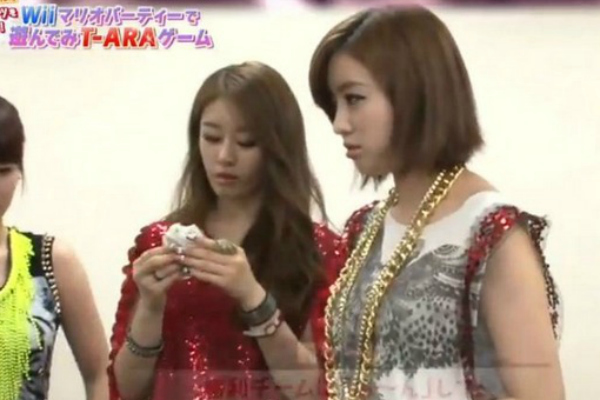 The online community bulletin boards for “We Got Married” and “Five Fingers” have been flooding with requests to kick Eun Jung out of the shows.

“Ham Eun Jung, don’t come out,” “You’re just full of lies,” “We request that Ham Eun Jung be taken out of the shows,” “A show can’t be good if the actress isn’t,” are some of the comments.

The controversy began when T-ara’s fans started noticing alleged signs of bullying by T-ara members toward one of their own, Hwayoung. One example is what fans think as a “Twitter ambush” by the members.

Popular community blogs on major portal websites posted a compilation of the “Twitter ambush.” On July 25, Hwayoung had tweeted, “Sometimes it’s difficult only with determination. These times I’m really hurt but I believe that heaven has good intentions… You already know, right, God?”

“@b89530 Determination+manners+consideration there’s a difference. Let’s do our best today, too”

“Just like how a position shapes the person, determination can also shape a person… it’s a pity. You need to learn how to take care of your peers @b89530: difference between determination ^^ let’s all have determination fighting!!!!!!”

The online community further sites tweets exchanged between Hwayoung and her twin sister.

“My half is in great deal of pain. No matter what anyone says you can make it through.”

A second batch of “evidence” amassed by the online community is a series of captures from a Japanese show featuring T-ara. It seems to directly implicate Eun Jung in an act of severe punishment. She is seen to be forcefully shoving rice cake into Hwa Yeong’s mouth, despite her pained look. Outraged netizens have dubbed Eun Jung, “Rice Cake Eun Jung” addressing her in a deliberately insulting way.

Many sympathetic netizens suggested, “We haven’t uncovered the truth yet. Let’s wait for a bit,” “Unless this controversy about deliberate ostracizing turns out to be real, I think it’s too harsh to make her leave the show,” “It’s too harsh to attack just one member,”

Eun Jung has been notable in her pairing with Lee Jang Woo in “We Got Married.” The couple steadily gained popularity among “WGM” fans and earned the nickname “Woo-Jung Couple,” translated as “friendship couple.” Eun Jung will also be featured in a highly anticipated summer drama, “Five Fingers,” with Joo Ji Hoon and Choi Shi Ra. The drama is scheduled to air after the finale of “A Gentleman’s Dignity.”

Meanwhile, it was announced on July 30 that Core Contents Media would terminate their contract with Hwayoung, letting her leave the group without any contract obligations. The former T-ara rapper is now free to sign with any agency.