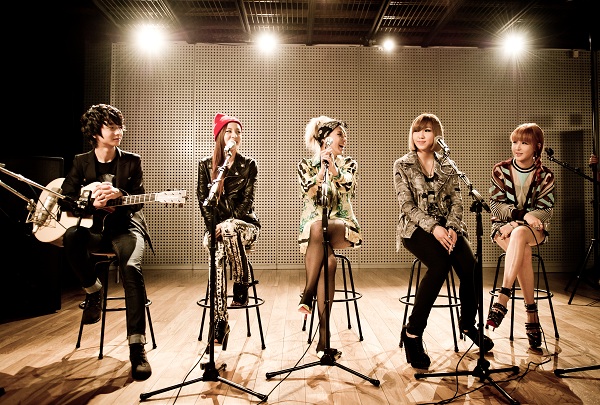 2NE1 has released videos of their joint collaboration with Jung Sung Ha, the YouTube sensation that amassed over 300K views for his guitar performance videos online.

On August 1, YG Entertainment revealed the videos of 2NE1 singing “I Love You” and “Lonely” with Jung Sung Ha, under the title, “YG ON AIR – 2NE1 X Jung Sung Ha Acoustic Collabo.” The videos were first played through Naver’s TVCAST, and were later posted on YGE’s official blog, YG-Life. With Jung Sung Ha providing the acoustic sound on the side, 2NE1 gave a much more relaxed vibe, taking a step away from their usual electro-heavy beats.

The collaboration was made possible after YGE first reached out to Jung Sung Ha, as the agency closely monitored the YouTube star’s videos regularly. Jung Sung Ha has uploaded a number of different cover videos on YouTube, and his videos have consistently ranked as some of the most viewed videos.

Meanwhile, 2NE1 will spend most of their time focusing on the upcoming global concert. They wrapped up their “New Evolution” concert in Seoul on July 28 and 29, and will fly to the U.S. in August for concerts in New Jersey and L.A.

Enjoy the videos below!

2NE1
yg on air
KPLG
I LOVE YOU
jung sung ha
Lonely
How does this article make you feel?