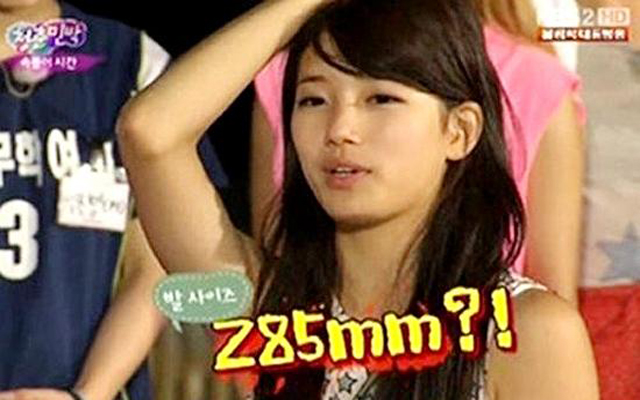 On the August 11’s broadcast of KBS 2TV‘s “Invincible Youth 2” Suzy took the chance to address the issue and take revenge on Boom. In that episode, Suzy and the G6 members spent the day with handball players from Masan High School and took the chance to speak up during a corner when everyone could talk about what was on their minds.

Suzy chose to call out Boom and revealed that she was still mad at him for stating that she had big feet on national tv when he said back in February “It seems that Suzy’s feet size is about 285mm (size 15).”

She explained, “Because of Boom I got the nickname “Big Feet.” She then added, “Because many articles were released at that time about this, people assumed that I really was a size 15. My foot size is 249,9 mm (Size 8).” Jewelry‘s Yewon then added, “This kind of nicknames is fatal for a female idol.”

Netizens commented, “Let’s believe what Suzy said now,” “No matter how you look at it her feet size isn’t 285mm,” “Suzy’s explanation was cute.”