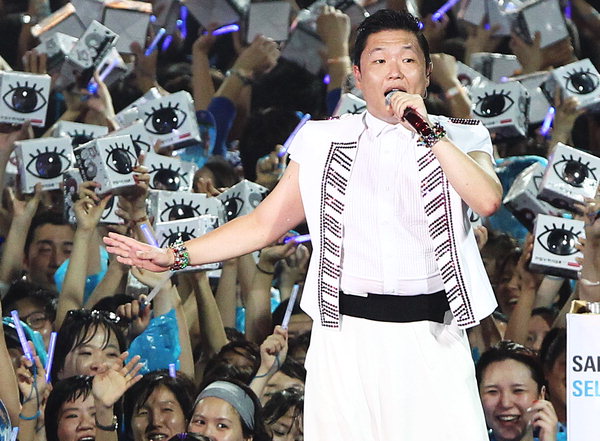 Psy’s “Gangnam Style” continues to dominate our chart as it becomes No. 1 for the third straight week. Songs spending the third week on top usually have scores on its way down but not “Gangnam Style”. It still manages to score 972 points, only five points lower than last week. This song has already made many headlines both domestically in Korea and internationally. This past week, 4minute’s Hyuna has released a female version of “Gangnam Style.” Hyuna appeared on the original version’s MV and this time she becomes the main vocalist with Psy providing the rapping. “Gangnam Style” also finally breaks through in music shows as it was just named the top song in KBS Music Bank this week. Congratulations.

Moving up to No. 2 is BoA’s “Only One” with 952 points. In almost any other weeks, this score would have been good enough to claim the top spot but “Gangnam Style” is just too strong. Nonetheless, it is already BoA’s best showing on our chart in a long time. Let see if “Only One” can overtake “Gangnam Style” next week.

BEAST’s “Beautiful Night” is moving up another spot to No. 3. The song has most of its success from network rankings but is a little bit behind in other chart sources as it was passed by BoA’s “Only One”. Still it ends up with a very respectable score of 924 and is capable to move up more and perhaps to challenge the top spot.

There are two new songs in the top 10 this week. Teen Top’s “Be Ma Girl” moves up a big 19 spot to No. 6. This is the title song from Teen Top’s special summer single. The group continues to work with Brave Brothers on this song. “Be Ma Girl” is an exciting club number with lyrics about having feelings for and confessing one’s love for a girl.

At No. 10, it is double happiness for Haha, as his collaboration with Skull “Busan Vacance” jumps nine spots to the top 10 this week. Earlier this week, Haha announced he will marry fellow singer Byul this November. It is such a coincidence that he is having a new top 10 song this week. While Haha has previously been in the top 10 with “You Are My Destiny”, this is the first time Skull hits the top 10. This reggae style hit provides listener to have a refreshing feel different from the usual dance, ballad, or hip-hop songs in the top 10. The laid back vocal from Haha & Skull fits the melody perfectly.

Album: Nam Soo Rim “Drive Me To The Moon” Track 4

Comments: Singer songwriter, Nam Soom Rim (Rimi) releases an album titled “Drive Me to the Moon.” The title track is “Don’t Love,” a number with lyrics about the hardships women feel when having interest and loving a man. Urban Zakapa’s very own Jo Hyun Ah is featured in this number.