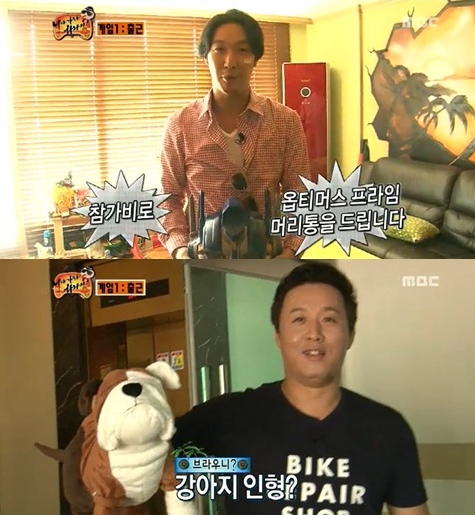 The “Infinity Challenge” members revealed their most prized possessions.

On the most recent episode of MBC’s “Infinity Challenge” that was aired on August 25, the members started battling it out for a ticket for a vacation in Hawaii.

Yoo Jae Suk said, “There are always people who say things like ‘My wife, my child, is the most important to me,” and voiced his concern. Actually, Jung Joon Ha said, “Nemo (his pet-name for his wife) wouldn’t work, right?” and Park Myung Soo said, “My daughter went to pre-school.” HaHa also showed his affection for his newly announced fiancé by saying, “The most important thing to me is Go Eun (Byul‘s real name).”

Yoo Jae Suk, who has been attached to his smart phone lately, even though he said, “Actually, my glasses are my most prized possession,” ended up saying, “Because the viewers might be uncomfortable, I’ll say my smart phone.” Park Myung Soo chose the soy bean milk and sweet potato his wife had packed him in the morning, and Jung Joon Ha brought the stuffed animal his mother-in-law had gifted him for the first time.

HaHa chose the Optimus Prime helmet he had worn during the “Infinity Challenge” guerilla concert before he left for his civil service duties. Jung Hyung Don brought the Entertainment Award trophy he and the members had won, Noh Hong Chul brought the camcorder he had received from his father, and Gil brought hair clippers.