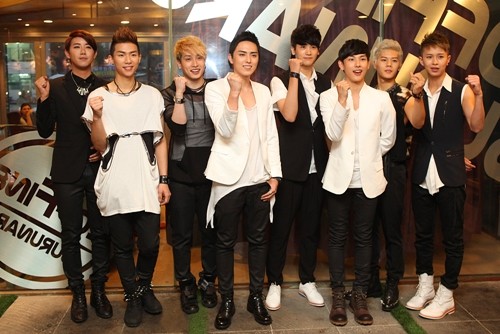 ZE:A will be releasing a new single album with 5 new tracks. The title track “Phoenix” expresses ZE:A’s wish to continue to keep rising without ever dying, just like the legendary bird. “Phoenix” has been written by three of the ZE:A members, Moon Joon Young, Ha Min Woo and Kim Dong Joon. “Phoenix” has a French pop style with a vintage synth sound and an acoustic base. “Various Excuses” is said to be the part two of one of ZE:A’s previous songs, “Heart For 2.”

B.A.P will be releasing a repackaged album with two new tracks, “Crash” and “I Remember.” “Crash” is composed by the people who created other hits such as MBLAQ’s “It’s War” and SISTAR’s “Loving U.” “Crash” is a British rock style track with synth and guitar riffs. Aside from B.A.P’s signature charismatic and masculine styles, this track will bring out the softer side of the boys. “I Remember” was Bang Yong Gook‘s introduction to the K-Pop music industry last year and featured BEAST‘s Yang Yoseob. This time, the same track will feature B.A.P’s main vocalist, Daehyun, who was recently noticed for his “7-level note progression.”

Solbi – Solbi Is A Tumbler (released)

Solbi has returned to the K-Pop scene after three long years! Solbi’s title track, “Tumbler” features 4minute’s Jiyoon and is a fun dance track that is easy to sing along and makes you want to dance. The song has a message of hope, courage and strength to those who are exhausted by the hardships of life. “Talk Oppositely” is a ballad that highlight’s Solbi’s strengthened vocal skills and is about a woman who doesn’t want to acknowledge a break-up with her lover. “I Didn’t Know Love” is another ballad that has a variety of different accompanying instruments in the background such as the acoustic guitar, piano, accordion and strings.

Seo In Young releases a new digital single amongst high expectations from fans and music lovers. “Anymore” is a pop rock track that has funky electronic sounds and African rhythmic drum sounds, which accompany Seo In Young’s powerful vocals. Although “Anymore” has a bright and upbeat sound, it is about a woman’s determination to get over her past love and hurt.

“I Need You” is a lovable duet track by two talented singers, Huh Gak and Zi-A. It is an acoustic R&B track that has a romantic guitar riff. The track is about the hidden love between a man and a woman. Both Huh Gak and Zi-A has created a beautiful harmony with their sweet and melodious singing styles. This song is perfect for the end of the summer as we get ready for the new fall season.

Thanks to jnkm for helping on this week’s translations.