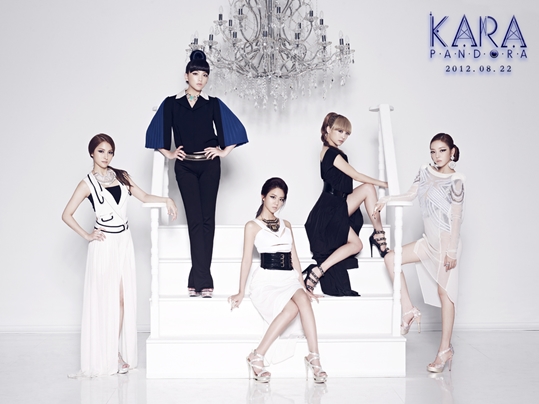 Kara Criticized for Not Speaking Up for Dokdo

In several media sites, articles harshly criticizing girl group Kara’s silence in response to a question about Dokdo during a recent press conference have cropped up and have been grabbing the attention of many netizens. The arguments and comments of one particular article entitled, “Kara – Was it Difficult to Say ‘Dokdo is our land’?” on the Nate news site are explained below.

(Note: Dokdo (or Takeshima) is a small group of islets in the East Sea that South Korea and Japan both claim territorial ownership over. The issue has controversially resurfaced in the wake of Olympic soccer player Park Jong Woo holding up a sign saying “Dokdo is our land” in celebration of South Korea’s win against Japan after the bronze medal match, and recent visits to the islands by South Korean President Lee Myung Bak.)

On August 22, at the Seoul Kwang-jang Dong Walker Hill Hotel, Kara hosted a show case and as well as a press conference to promote their new album. During the press conference, the question “If you received a question about Dokdo in Japan, what position would you take?” was tossed into the air.

But MC Park Ji Yoon, who was the announcer of the event that day, dismissed the question. It is most likely that the question was on a list of questions to avoid intentionally before the press conference. All five Kara members stayed silent.

The article argues that although the event was for the purpose of promoting Kara’s new album activities, and although the announcer rejected the question, it is without question, that the girls should have replied with a defiant “Of course, Dokdo is Korea’s land.” Instead of giving what should have been an obvious and easy answer, according to the news article, Kara chose to keep silent.

It was also expressed that if the press conference was not the appropriate place to express their views, the girls should have expressed something about it on their Twitters or even on any of the variety programs they have recently participated in.

The article acknowledges that the issue is a sensitive one and that Kara’s choice to stay quiet is understandable. Speaking up may create problems in their activities abroad; however, that silence is not the best course of action in response to questions that ask their point of view on the Dokdo issue.

The article further raises the question of whether or not Korean celebrities should or should not keep silent on political issues such as these. The article voiced a sense of pity that the singers had to restrict their voices to prevent possible upset.

Recently actor Song Il Gook, who participated in a trip to Dokdo with singer Kim Jang Hoon was kicked out of his role in a drama, and the infamous Dokdo sign incident during the Olympics stripped player Park Jong-woo the rights to a bronze medal. Were these individuals deserving of these punishments, and if so on what basis?

It was also noted that anti-Hallyu groups have also started to associate Bae Yong Jun and Girl’s Generation to the island issue, hinting at Kara’s silence as submitting to unfair accusations and a failure to stand up for Korea.

Whether or not one agrees or disagrees with the article and to the degree that it berates the girls, there is no doubt that it raises an important question about the freedom of celebrities’ political opinions. Should K-Pop stars that promote overseas keep politics strictly out of their work due to the sensitive issues at hand? Or does everyone have a right to express his or her political opinions?