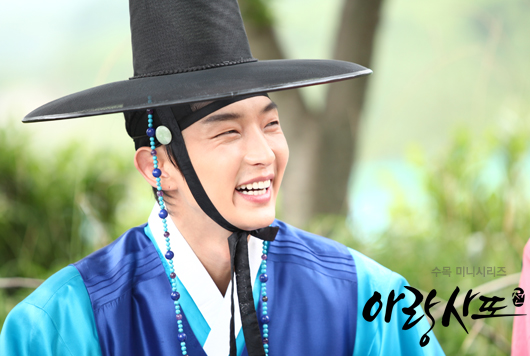 For fans waiting for the fifth episode of MBC new Wednesday-Thursday drama “Arang and the Magistrate,” the drama has released photographs of actors Lee Jun Ki and Kwon Oh Jung as a surprise gift.

Lee Jun Ki plays the lead role of Lee Eun Oh who promises the spirit called Arang, played by Shin Min Ah, to help her in her quest to find out her identity and the circumstances of her death if he becomes a magistrate and, through some behind the scenes wrangling of Arang, becomes the new magistrate. Lee Jun Ki’s character Lee Eun Oh is followed closely by his trusty man servant Dol Swe who is played by Kwon Oh Jung.

The released photograph is a composite of four photographs in a “find the picture that does not match” concept. The “EunDol” couple (Eun Oh and Dol Swe) of Lee Jun Ki and Kwon Oh Jung made the most of their standby time by coming up with a fun concept photograph of shooting stills as if they were in the midst of researching for their roles and having viewers find the picture that does not match. The staff helped to shoot the photographs and completed the work.

Lee Jun Ki
Arang and the Magistrate
KPLG
Arang
Kwon Oh Jung
How does this article make you feel?