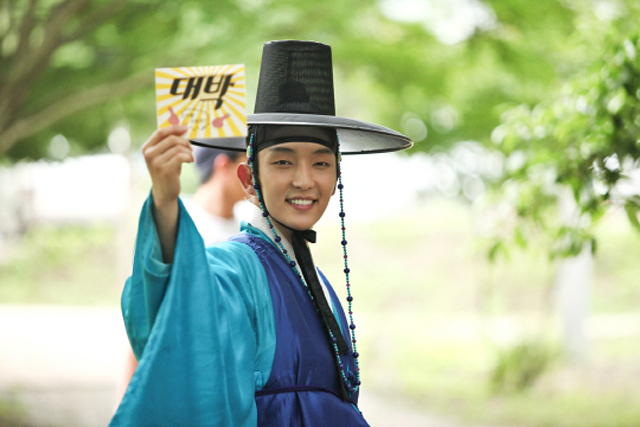 Behind-the-scenes photographs of actors Lee Jun Ki and Kwon Oh Jung playing around on the set of MBC’s new Wednesday-Thursday drama “Arang and the Magistrate” have been released.

Lee Jun Ki is making his comeback after military service with the drama “Arang and the Magistrate” in which he plays the lead role of Lee Eun Oh who gets enlisted to help a spirit named Arang, played by actress Shin Min Ah, to figure out her identity and the mystery of her death. Kwon Oh Jung plays Lee Jun Ki’s character’s close servant and advisor named Dol Swe.

On the set of drama “Arang and the Magistrate,” Lee Jun Ki is known as the “mood-maker” and plays a strong role in leading the cast and staff into an enjoyable atmosphere. As Lee Jung Ki and Kwon Oh Jung are constantly together throughout the shooting, there is much laughter spread on set. In the drama as well, there relationship is uncommon. With a day and night, 24/7, unconditional love for his Eun Ho, Dol Swe brings comic relief to the drama when he becomes jealous of Shin Min Ah’s character.

In the fourth episode of “Arang and the Magistrate,” Shin Min Ah’s character, the spirit named Arang, comes back to Earth as a human in a bid to find out her identity and the mystery of her death within a three-month period. When Arang meets Eun Oh again as a human, Dol Swe sees her and mistakes her as Eun Oh’s secret girlfriend. Dol Swe is overcome with jealousy and irritation that he was not informed of this new person in Eun Oh’s life.

Lee Jun Ki
Arang and the Magistrate
KPLG
Arang
Kwon Oh Jung
How does this article make you feel?