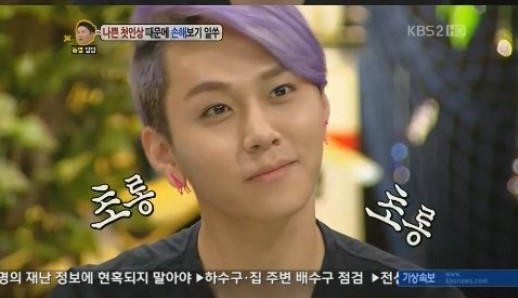 BEAST‘s Lee Kikwang recently expressed an overly modest view of himself. On the episode of “Hello” that aired on August 27, Kikwang shared that he doesn’t think he is very popular.

BEAST appeared on “Hello” two years ago. Back then, BEAST member Son Dongwoon said that his worry comes from being too good-looking. So this time, the MCs asked if Dongwoon’s worries were solved at all. Dongwoon humorously answered, “It’s getting worse.”

Then the MCs proceeded to ask the members, “Which members are popular in which countries?” Then Kikwang revealed, “Dongwoon is the most popular in the Arabic countries.”

Then the MCs continued, “Then Kikwang, in which countries are you the most popular?” Then Kikwang answered, “I’m not that popular,” which made the audience gasp in disbelief. Kikwang continued, “In any country, Yoseob ranks higher in popularity,” commenting that Yoseob’s cuteness is likeable anywhere.

The conversation moved toward Yong Junhyung, who expressed that his recent worries are about his face. He said that other people mistake him for having an attitude problem because of his eyes.

He said, “I hear a lot that I look like I don’t have the will to do anything because of my eyes” and his fellow BEAST members added, “We also hear that people think Junhyung’s eyes look dead.” Junhyung revealed that he was pointed out by others for looking unwilling.

He continued, “I fixed it a lot now,” as he widely opened his eyes to make it seem like he has a lot of motivation. MC Shin Dong Yup added, “If you blink a lot, it seems like you have a lot of zest,” which made the whole studio laugh.