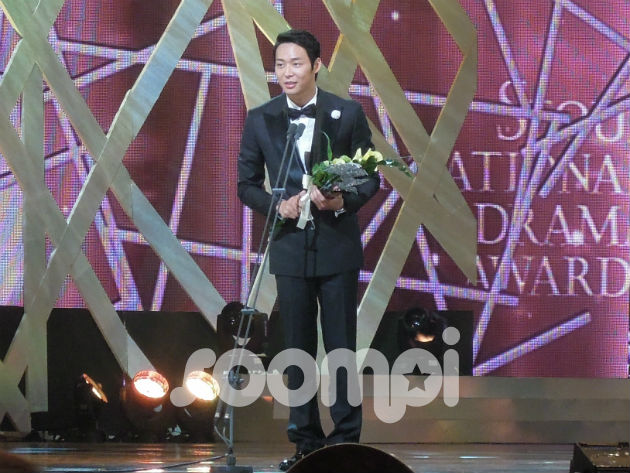 Soompi was invited to attend the 2012 Seoul International Drama Awards on behalf of French-Korean travel agency Corée Voyage. What does a travel agency have anything to do with a prestigious drama awards ceremony, you ask? Well, as you might be able to tell by its name, the Seoul International Drama Awards encompasses not only the K-dramas so loved by all of us, but all the best dramas from around the world. This year’s nominees included the US hit series “Boardwalk Empire,” Turkey’s “Ezel,” UK’s “Great Expectations,” Germany’s “Hanna’s Decision,” China’s “Startling by Each Step,” as well as national favorites such as “Deep-Rooted Tree,” “King 2 Hearts,” “City Hunter,” and the drama of the night, “Rooftop Prince” (we’ll explain soon why it earned that title)! To cultivate the international spirit of the occasion, this ceremony was actually open to Hallyu tourists from all around the world! Of course, you had to have tickets in order to attend, but still, the presence of screaming fangirls helped to bring down the formality of the proceedings. The ceremony’s hosts, Shin Hyun Joon (“Bridal Mask”) and Han Go Eun (“Me Too, Flower!”), took full advantage of the casualness, occasionally and humorously interrupting the award presenters and winners during their speeches. While Yeo Jin Goo and Nam Bora were presenting the award for Best OST, Shin Hyun Joon asked them to sing a few bars! Nam Bora, clad in a gorgeous white dress, gamely lifted her voice to carry a line from the “Secret Garden” OST. Yeo Jin Goo, when given the same request, mumbled worriedly, “Okay, I understand.” He paused for a long while, looking obviously tortured, then blurted out, “Oh, I’m thinking!” Finally, he copied Bora’s line, then burst into nervous giggles. Hey, we’re not all meant to be singers! Anyway, the two recovered sufficiently to announce the winner as King 2 Hearts’ “Missing You Like Crazy,” by Girls’ Generation Taeyeon (who sadly wasn’t there to accept the award).

Also highlighting the informality of the ceremony, co-host Han Go Eun interrupted Park Yoochun during his speech, asking him to “please stand up straight.” Well, you can’t fault the poor guy for being too tall for the microphone! Yoochun obediently lengthened his figure for a few moments, but soon had to hunch back over the microphone, the better to be heard over all the excited rustling of the fangirls in the audience. Well, at least they fixed the microphone afterward — and just as well, too, because that was hardly to be Yoochun’s last stand at the microphone. The JYJ bandmate was clearly the man of the hour, winning not only the People’s Choice Award for the second year in a row (this year also accompanied by China’s Nicky Wu and Taiwan’s Wang Ding Ju), but also the Best Korean Actor Award for his hit drama, “Rooftop Prince.” His costar, the charming and elegant Han Ji Min, carried the award for Best Korean Actress, lighting up the theater with her smile as she thanked the crowd. At the end of the evening, the costars reunited onstage to accept the Golden Bird Prize for the Hallyu Drama Series.

Technically, the top honor of the night went to “Deep-Rooted Tree,” which earned the Daesang Grand Prize for Hallyu Drama Series. But with the hordes of fangirls who brought the house down screaming whenever Yoochun’s visage appeared onscreen, there could be no doubt as to who really stole the show, or why Yoochun won the People’s Choice Award for the second year in a row. Clad in a plain tuxedo, with a hairstyle in a style that seemed more fitting on an office worker than on one of the biggest Korean idols in the world, Yoochun nonetheless managed to radiate maximum star appeal onstage. While humbly giving thanks to all his fans, you could see the fan portion of the crowd, from Filipino teenagers to Japanese grandmothers, melting in unison at his obvious good-boy charms.

Of course, the evening wasn’t all Yoochun, all the time! There were also guest appearances from stars such as Ji Chang Wook (devastatingly handsome in a black-on-black tuxedo), CN Blue’s Lee Jung Shin (tall and extremely skinny, with those cheekbones that could cut ice), Davichi’s Kang Min Kyung (shapely and pretty in even a plain LBD), and Moon Chae Won (stunning in a long-sleeved lilac dress), accepting the best drama series award for “The Princess’ Man.”

And you can’t cater to drama fans without music — especially when it’s music from OSTs and idol groups! MBLAQ, clad in simple black suits, kicked off the musical portion of the evening with “This Is War.” CN Blue’s Jonghyun tunefully performed “My Love” from “A Gentleman’s Dignity” before he and the rest of CN Blue followed up with a performance of “Hey You!” that had the whole house swaying to the catchy beat (from their seats, of course). Huh Gak stunned the crowd into hushed silence when he sang “Don’t Forget Me” from “The Greatest Love.” Hearing his perfect vocals carry throughout the auditorium, there could be no doubt as to why he won “Superstar K2.” For the last musical number of the evening, 4minute performed “Volume Up.” Although we love 4minute’s songs and unrivaled fierce image in K-Pop, we couldn’t help but notice that HyunA seemed to be lip-synching when compared to her group mates. But she made up for it with her stellar dancing.

Although like most of the audience we were most attuned to the K-drama portion of the evening, we were also touched by the speeches from the international winners, most notably Sarah Phelps (“Great Expectations”), who gave a short but sweet speech about how her award was a double honor for her father, whose favorite novel was “Great Expectations,” and Korea one of his favorite countries. We were also moved by Christine Neubauer (“Hanna’s Decision”), who gave a halting but obviously heartfelt speech that was accompanied by the biggest, most enthusiastic smiles of the evening, and the producers of the Philippines’ “Remembering,” who dedicated their award to the Filipino people.

Finally, the ceremony wound to a close, and the enraptured fans watched as the winners all crowded onstage for one last thank-you, with Park Yoochun and Han Ji Min front and center, of course! It was a real experience, and many thanks to Corée Voyage to letting us attend this epic event! Until next year!

Most Popular Foreign Drama of the Year: Startling by Each Step (China)