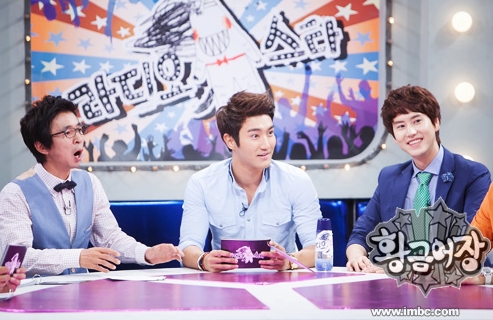 Super Junior‘s Leeteuk revealed that fellow member Choi Siwon‘s wealth is greater than what has been reported in the media.

On September 5, Leeteuk, Siwon, Eunhyuk and Shindong appeared on “Radio Star.” Leeteuk shared, “It’s several times more than what’s been reported in the news. We are actually toning it down when we talk about it.” Eunhyuk added, “Usually, when people call someone an heir, they tend to exaggerate but we’re not exaggerating.”

Leeteuk continued, “Recently, Siwon’s father moved to a bigger company. His father was overseeing an innerwear brand but he just passed it over to Siwon’s mother.”

The Super Junior members continued, “Siwon is probably number 2 in the idol heir hierarchy. We heard that the number 1 spot belongs to ZE:A‘s Hyungsik. They say that Hyungsik’s father is the managing director of a foreign car company ‘B,’ but Siwon is not at that level. But honestly, Hyungsik’s parents are rich, not Hyungsik himself – he has nothing. But Siwon has several of his own homes.” By this point in the show, Siwon didn’t know what to do with himself because he was so embarassed at his members’ exploitation.

But the members went on. Leeteuk said, “I was driving Siwon home and I dropped him off in one of the buildings in the front. But after a while, he asked to be dropped off in the back building. When I asked why, he said his place in the front building was undergoing an interior renovation so he is staying at his place in the back building,” explaining how Siwon had several of his own homes.

Shindong added, “And that’s not even his family’s homes. It’s his own. Hyungsik is really nothing compared to Siwon,” which brought about much laughter.

When the “Radio Star” MCs expressed their surprise, the members took it even further and said, “So in conclusion, Siwon is the number one richest idol. He could probably even buy MBC.”