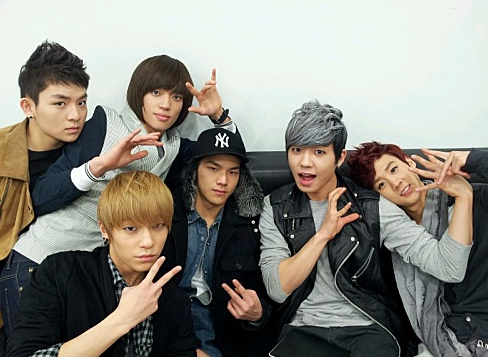 Teen Top idol group members C.A.P, Chunji, L.Joe, Niel, Ricky, and Changjo were featured in the September issue of fashion magazine “Vogue Girl.” Below are selected excerpts from the interview. To view Teen Top’s photo shoot in “Vogue Girl,” don’t forget to click through the pages.

On the concept of their new single “Be Ma Girl,” Chunji said: “I think we all liked the concept? I don’t have any complaints because every song tends to reflect our thoughts.” Changjo added: “That’s right. Our entertainment company listens to all of the things we want to do.”

On their best and worst song promotional activities, Changjo said: “The worst was “Supa Luv.” At that time, no matter how we shot our photographs, we came out weird-looking. Of course, even though the reason could be that we were lacking in experience…” Niel: “It was too strong of a concept!” L.Joe: “I think because we wanted to look strong, we overly forced our expressions. It could not not be awkward.”

On who would be the best and worst boyfriends, Chunji said: “If you look at our usual every-day personalities, even though Changjo has a lot of shyness or self-consciousness, whoever he meets, Changjo will be really good to them. Even though it seems like L.Joe knows a lot, when different situations occur, he can’t really do that well.”

On members who have sincerely loved, Changjo said: “There’s no one, right? Nobody.” Chunji stopped him and said: “There could be someone. What do you know?” C.A.P added: “Your first love is a sincere love.”

On members who haven’t confessed, L.Joe said: “I haven’t confessed. [The reason being] I’m the kind of person who just watches for a long time. Even if you meet, I don’t think you should confess at the start, but see how things go for awhile.” Niel also said he hadn’t confessed.

Earlier, in August, Teen Top released a music video for “Be Ma Girl” and a dance performance version which you can watch on Soompi.