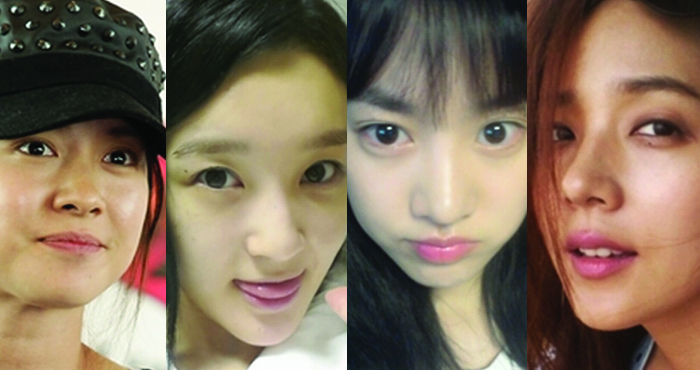 Celebrities: Before and After Makeup

Several before-and-after-makeup photos of female celebrities have surfaced various online communities, wowing netizens with their dual charms. Many of these celebrities proudly shared their make-up less photos on their Twitter, flaunting their naturally flawless porcelain skin, while others were seen with their bare faces at the airport.

Scroll through the gallery by clicking on the arrows at the bottom right hand corner of the box!

Song Ji Hyo has revealed her bare face on SBS’s “Running Man” on numerous occasions. Many people have commented that the easy-going and tomboyish actress looks prettier without makeup.

On her way to London to film SBS’s “Healing Camp London Olympic Special,” Han Hye Jin showed up to the airport in comfortable fashion, pulling her hair back with a headband and proudly exposing her her bare face.

T-ara’s Eunjung ditched her eyeliner, as well as other makeup products, at the airport.

Former After School member Kahi shared her no makeup photo on her Twitter. Many observed that she resembled actress Jung Ryeo Won in the photo.

Girls’ Generation’s Taeyeon radiates a different appeal with and without makeup.