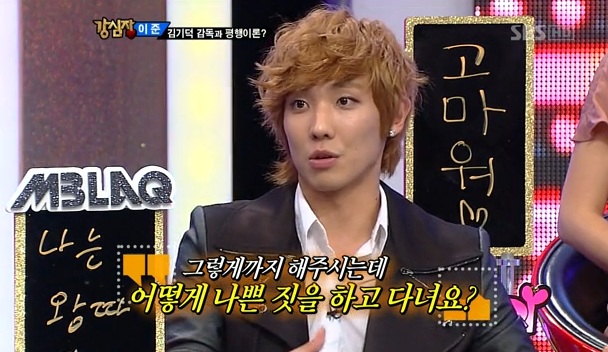 MBLAQ’s Lee Joon revealed that he was gifted a box of condoms from his very own mom as a college entrance present.

On September 11, Lee Joon made a guest appearance on SBS “Strong Heart” and said, “I had a shocking incident. After I got into college, my mom gifted me a box of condoms.”

“As she gave me the condoms, she said, ‘Make sure you don’t do anything irresponsible. Because my mom gave me so much trust, I couldn’t do anything wrong during college,” he continued.

After his comment, Leeteuk followed up and asked, “So did you use those?” which brought the whole studio into laughter. The show’s MC Shin Dong Yup also said, “Try to control your mind whenever you’re tempted by looking at your mom’s gift.”

Shin Dong Yup then asked, “So do you have it or not?” Lee Joon quickly said, “It’s in my room…,” putting an end to the awkward conversation.