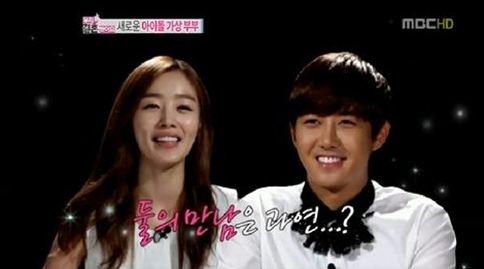 On September 8, the latest episode of “We Got Married: Season 4” was aired. ZE:A’s Kwang Hee and Secret’s Sun Hwa (a recent couple added to the show) were going to Japan and decided to go on a shopping date to prepare for their airport fashion. After they enjoyed their date, they headed to the airport.

It was also during this day that Sun Hwa found out that Kwang Hee confessed that his ideal type as After School’s Uee and that he revealed through a talk show that he previously went out on a date with a member from a girl group.

Kwang Hee left Sun Hwa’s side momentarily while they were waiting for their flight and she decided to take a look through his cell phone’s call history. To her surprise, she saw a very familiar name who is only revealed as a female celebrity. She went on, “I will not disclose who the female is, but I’m sad. I don’t have a phone conversation with a male celebrity. The only guy I talk to is my manager.”

This episode was also the last episode for the “Dimple Couple” Kang Sora and Super Junior’s Lee Teuk.

Soompiers, how do you like the new couple? Do you think they’re adjusting well to married life?

We Got Married
KPLG
Kwang Hee
Sun Hwa
How does this article make you feel?