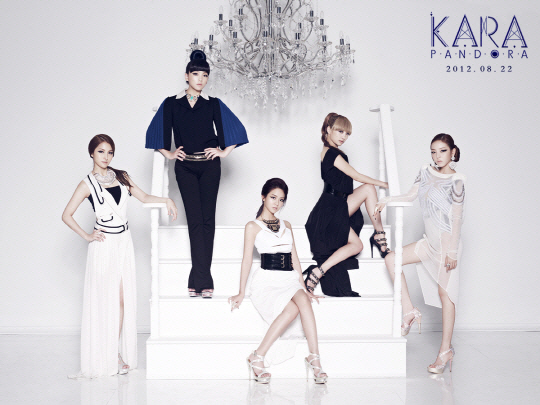 After six dominating weeks on top, Psy’s “Gangnam Style” finally gave way to Kara’s “Pandora”, as the latter song climbs to No. 1 this week. Even though “Gangnam Style” remains a big hit internationally (with Psy in the USA appeared on Today Show and The Ellen DeGeneres Show earlier this week), its popularity begins to fade in Korea. Still, it takes Kara, one of the most successful artists on our chart in the past few years, to overtake Psy. “Pandora” has a convincing win of over 100 points this week. Congratulations to Kara.

There are three new songs in the top 10 this week, led by B.A.P’s first ever top 10 hit on our chart “Crash”. This is already the B.A.P’s fourth hit song of 2012. The first three songs, “Warrior” reached No. 23, “Power” reached No. 14, and “No Mercy” reached No. 15. “Crash” makes a giant 23-spot leap this week all the way to No. 4. It is a British rock style track with synth and guitar riffs. Aside from B.A.P’s signature charismatic and masculine styles, this track brings out the softer side of the boys.

At No. 6, Rumble Fish returns to the top 10 with “Don’t Be Like That”, moving up 14 spots. Originally a five-membered modern rock group, now lead singer Choi Jini has gone solo. “Don’t Be Like That” was written, composed and produced by Rumble Fish herself along with Buzz’s Yoon Woo Hyun. It has an addictive melody with a fast and strong beat. The song is about a girl who catches her man red-handed with another woman. Rumble Fish’s strong vocals match well with the content and sound of the song.

At No. 8, one of the most anticipated release this fall: G-Dragon’s first mini-album “One Of A Kind.” The preview single “That XX” moves up into the top 10 this week. Unlike his other songs, it is an acoustic guitar number about a guy who hates the fact that his crush is getting cheated on by her boyfriend. G-Dragon will have his comeback performance on SBS Inkygayo this week, and the mini-album title song “Crayon” is expected to hit our chart soon.

Comments: Fin.K.L (Fine Killing Liberty) is a legendary K-Pop girl group from DSP Entertainment debuted in 1998. They were one of the top girl groups along with S.E.S and Baby VOX in late 1990s and early 2000s. Members Lee Hyori, Ok Ju Hyun, Lee Jin, and Sung Yuri are household names even today. The group released four full studio albums from 1998 to 2002. Fin.K.L never officially announced their break up, leaving the door open for a comeback but as each year passes by, it looks less and less likely that a comeback will happen. All four members are enjoying successful solo careers, with Lee Hyori and Ok Ju Hyun becoming solo artists, and Sung Yuri and Lee Jin becoming actresses.

Unlike S.E.S and Baby VOX who sings mostly dance beat songs, Fin.K.L is more into ballads and mid-tempo pop songs. “Blue Rain” was their debut song back in 1998. Recently, Girl’s Day remade this song as part of songwriter Shin In Soo’s latest project album “The S.” It brings back a lot of memories for old school K-Pop fans.