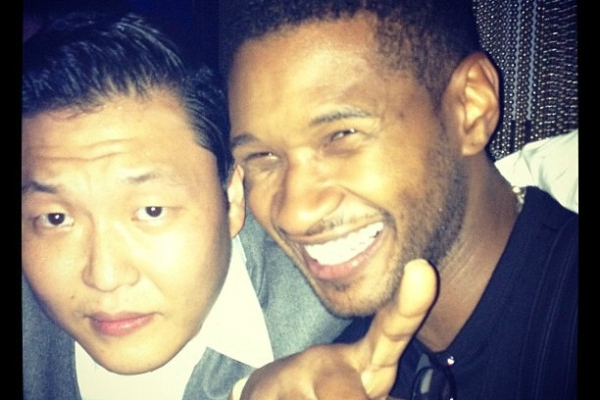 PSY and Usher: Love in a New York Club

Korea’s new world star PSY has been spotted with Usher at a club in New York!

On September 15, an iPhone video footage of the two celebrities was uploaded on YouTube. They were partying at Circle, New York City’s most famous K-town club.

Amidst an enthusiastic crowd, PSY first introduced Scooter Braun, the American talent manager famous for representing Justin Bieber and Carly Rae Jepson. He also made a surprise announcement of his future U.S. activities.

“According to my friend here [Braun], I will get to perform at Madison Square Garden this year.”

PSY also added, “I’m really thankful. Let’s party hard for the next two hours. I have another friend here that Braun just introduced me to.” The friend was none other than Usher.

PSY and Usher will be sharing a stage later this week. They will be featured at iHeartRadio Music Festival at MGM Grand in Las Vegas from September 21 to 22. The show will be hosted by Ryan Seacrest, featuring the Billboard charts’ superstars such as Taylor Swift, Rihanna, and Bon Jovi.

In a recent interview, YG Entertainment’s Yang Hyun Suk has stated that PSY will be busy in the States all throughout this year.

“I’m aware that we’ll be seeing progress with PSY’s new project in the United States, but it’s not my place to reveal them. For the next year, PSY will be spending the majority of the time in the U.S.”

PSY will be coming back to Korea briefly for two weeks starting September 25.

PSY
usher
Scooter Braun
How does this article make you feel?