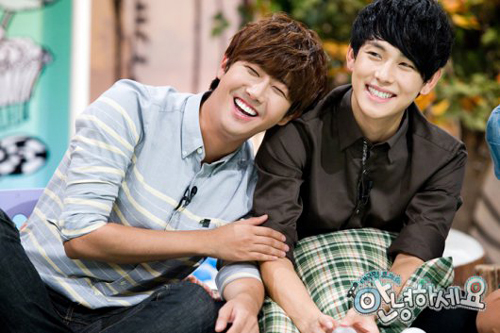 Kwang Hee: “After Other Members Started to Get Popular, I Got Pushed Back for Lovecalls”

ZE:A‘s Kwang Hee revealed that he is being pushed back for lovecalls because of the other members gaining popularity.

MC Shin Dong Yup asked Kwang Hee, “Before you were the only one who was busy. But now that the other ZE:A members are getting busy, how do you feel about that?” Then Kwang Hee answered, “I’m partly saddened by it but partly happy too.”

Kwang Hee continued, “Television and broadcasting staff are saying that they’ve seen too much of me and that now they want to see more of Siwan or Dong Jun.” He expressed sadness of being pushed back for lovecalls within the team.

Meanwhile, Kwang Hee also topped the headlines by saying that he had plastic surgery in order to achieve his dreams to become a celebrity.