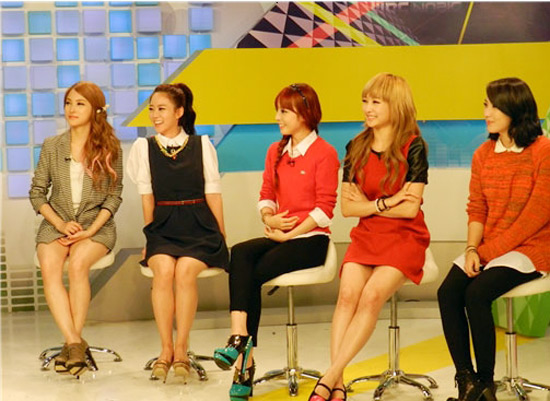 This is a transitional week as there were a lot of movements on the chart. However, Kara remains No. 1 for the second straight week with “Pandora.” This song wins despite a big drop in points. “Pandora” barely beats out T-Ara’s new hit “Sexy Love”, which is our highest new entry into the top 10 this week.

After a very controversial month in August that saw Hwayoung left the group, T-Ara is coming back strong with their latest mini-album “Mirage.” Despite a lot of negative publicity surrounding the group, it doesn’t look like T-Ara’s popularity is affected as “Sexy Love” moves up to No. 2 in just its second week on the chart. This is an addictive synth sound club dance track composed by Shinsadong Tiger. “Sexy Love” has the inside track to become our new No. 1 song next week.

Still holding very strong in the top three is Psy’s international hit “Gangnam Style.” After six weeks on top of our chart, this song still refuses to drop, and it even recaptures the top spot on KBS Music Bank K-Chart this week. Psy is now promoting “Gangnam Style” is the USA, appearing in many shows and concerts.

There are three other new songs in the top 10 this week. At No. 6, it is the highest debut on our chart this week. FT Island comes back this fall with their fourth full length album “Five Treasure Box.” The title song “I Wish” is a pop rock track written by hit maker Kim Do Hoon. “I Wish” is already No. 1 on M!Countdown this week and will challenge T-Ara’s “Sexy Love” for the top spot on our chart next week.

We are seeing a strong influx of rookie female soloists this year. We’ve already seen Ailee and Juniel earlier this year, and now Baek Ah Yeon joins the battle for the top female newcomer of 2012. Baek Ah Yeon hails from the K-Pop Star competition and is the first contestant to debut. Signed under JYP Entertainment, her first album “I’m Baek” has received very good responses. The title track “Sad Song” debuts at No. 9 this week, not bad for a rookie artist. “Sad Song” is a ballad number composed and penned by Super Changdda of JYP Entertainment with the help of JYP who also took parting in writing the lyrics. With the help of distortion and power snares in the song, Baek’s powerful vocals are livened. Despite strong competition from many established idol artists, “Sad Song” has topped many internet charts in Korea last week.

Moving up three spots to No. 10 it is the first top 10 hit for mixed indie trio Urban Zakapa. Perhaps one of the top vocal groups in Korea who are not well known by mainstream fans, Urban Zakapa has impressed listeners with their crystal clear vocals. They are one of the few artists who sound much better live than on the records. Recently they successfully break into mainstream on their new digital single “I Hate You.” Urban Zakapa is definitely a group you should listen to if you have not yet heard of their music.

Turtles is a mixed pop/hip-hop group consists of leader/songwriter/male rapper Turtleman, female rapper Z-E, and female vocalist Gumpi. Their music is always fun and relaxing to listen to, much like another co-ed group Cool. The trio was very successful in the mid-2000s, bringing a lot of joys to fans with their colorful songs. Unfortunately, the group’s inspirational leader Turtleman unexpectedly passed away due to a heart attack in 2008. Turtles disbanded. Gumpi debuted as a solo trot singer.

Last year, Turtles recruited a new male member Lee Kang and they re-grouped to release a new digital single “Protagonist” with moderate success. But the void left behind by Turtleman is irreplaceable.

“Aeroplane” is Turtles’ biggest hit and also one of the all-time biggest hits on our chart. It is one of the very few songs to spend six weeks as No. 1 in 2006, even though this is the only six-week champ that is non-consecutive.