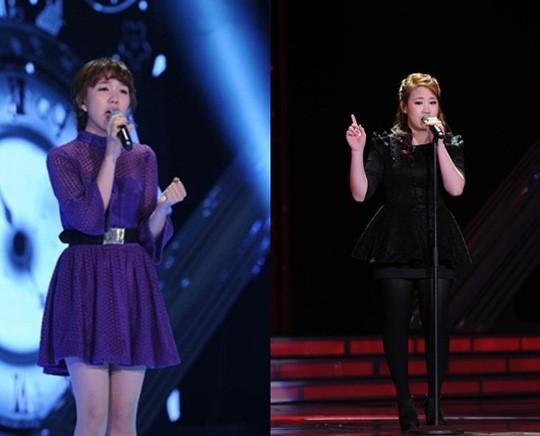 Baek Ah Yeon, the singer from “K-Pop Star,” gave words of encouragement to Park Ji Min before her debut. On September 22, Baek Ah Yeon wrote on her twitter, “Cute Ji Min, who came to the set of my M/V filming for ‘Slow Song!’ Our Ji Min is going to debut soon, too!!! You will do well. Fighting!!!”

In the photo that was attached along with the tweet, it shows Baek Ah Yeon looking at the camera while looking cute hugging Park Ji Min. She is dressed in a blue tube dress and looks very sophisticated. On the other hand, Park Ji Min looks just like a young teenage girl she is.

Baek Ah Yeon is at the moment performing on various music shows after releasing her debut album, “I’M BAEK,” with the title song, “Slow Song.” With the song showing off her clear voice, it swept download charts the day it was released.

Park Ji Min will be debuting in October as 15& with a girl the same age as her. She was the winner on “K-Pop Star,” which viewers predicted early on because of her dynamic voice.