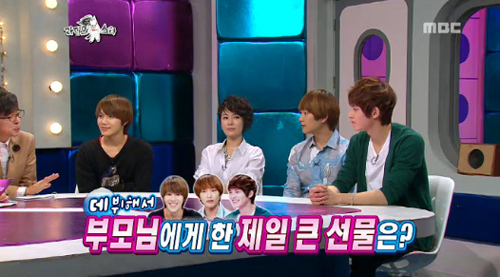 SHINee’s Taemin revealed that he bought his parents a house in Cheongdamdong (an affluent neighborhood within Gangnam) and an imported car (which is known to be very expensive in Korea).

During the broadcast, MC Kim Kook Jin asked the idol singers, “What’s the biggest present you’ve given to your parents since debut?”

Taemin responded, “I bought my parents a house in Cheongdamdong and an imported car.” Onew replied, “I gave my parents all the money I earned. They got a new car and I’m currently saving to give them a new house.”

Lee Jong Hyun answered, “I bought them a house in Busan. Father doesn’t have a driver’s license so I didn’t get him a car.”