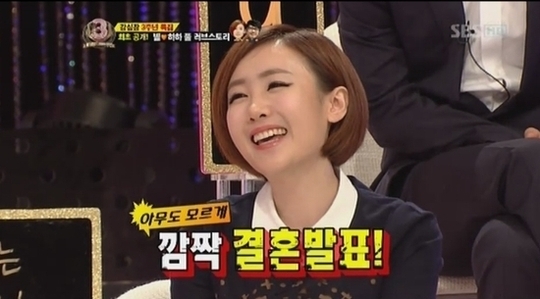 Byul: “Haha Is Not a Little Boy, He’s a Manly Man”

Singer and bride-to-be Byul shared the stories of her fiance Haha and how they became a couple.

Byul was a guest on the episode of “Strong Heart” that aired on October 9 and said, “Many people know Haha as the ‘little boy’ character but he is actually a manly man.”

Byul and Haha announced their marriage plans in August and received a lot of attention. Byul said, “No one knew about our relationship, not even the ‘Running Man‘ or ‘Infinity Challenge‘ cast members,” and “Just before we announced this, only Yoo Jae Suk knew.”

Byul continued, “After our wedding plans became set, I realized that this would have never happened if Haha wasn’t manly and pushed things forward.”

But Byul admitted that it wasn’t Haha’s manliness that bought her heart but his honest and genuine heart. She said, “What I liked about him the most was his realness and how he didn’t try to be something he’s not.”

She continued, “I thought, maybe there is such a thing as fate because we did many broadcasts together,” and “When we were recording for the same broadcast and I was asked who my ideal type was, Haha answered for me and said, ‘it’s me right?'”

She also shared, “This might sound like I’m showing off but I’m so thankful that Haha won me over.” She continued, “Haha is very forward. I met Haha for the first time while being a guest on a radio show and afterwards, he would call me every night after he went drinking so I was kind of burdened.”

“Then after five years or so, I woke up in the morning and I got a text from him saying, ‘It’s me, Dong Hoon. I like you. I know we were at different places for all this time but let’s find our right place now’ and I was so bewildered,” she said, making the whole studio laugh.

“Afterwards, we contacted each other alot. He would always brainwash me by saying, ‘I want to live in a house with a big garden and a big dog. Please have my twins,” she continued with a laugh.

Finally, Byul said, “I never really had a fantasy about getting married but he implanted it for me,” expressing her gratitude toward Haha.

Byul and Haha will be tying the knot on November 30.

Byul
Strong Heart
HaHa
KPLG
How does this article make you feel?