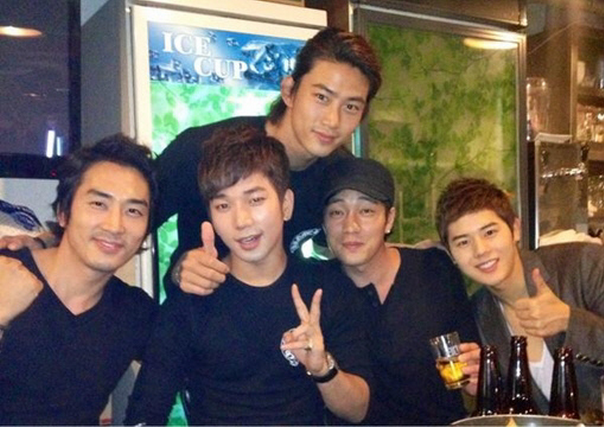 Korea’s hottest men recently got together for a sizzling photo. On October 10, Song Seung Heon shared a photo of himself with his good-looking colleagues much to fans’ delight. The actor tweeted, “Afterparty following Ji Sub’s ‘A Company Man‘ Premiere~ Great guys~” and attached the group photo.

In the photo, Song Seung Heon posed with So Ji Sub, MBLAQ’s G.O., 2PM’s Taecyeon, and ZE:A’s Dong Joon following the VIP preview of So Ji Sub’s new movie “A Company Man,” which took place at the COEX in Gangnam. Many celebrities attended the event, including Lee Byung Heon, Song Seung Heon, Han Hyo Joo, Yoo Seung Ho,  2PM, After School, ZE:A and more. After the star-studded premiere, it appears that So Ji Sub got together with his friends for a celebratory drink. Dressed in all black, the five male stars lit up the photograph with their handsome looks.

Netizens who’ve seen the photo commented, “Daebak. That’s like the five greatest looking guys in Korea in one photo,” “They look so close,” “I wish I was there,” “Hope the movie does well,” and more.