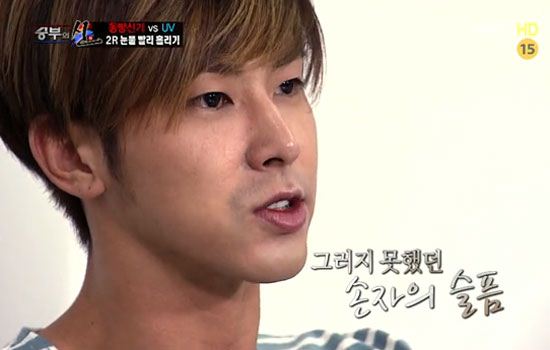 DBSK’s Yunho and his tears made it to the top of the online key words chart after he shed tears at the thought of his late grandfather during MBC “Sunday Night – God of Victory.”

During the October 14 episode of “God of Victory,” DBSK and UV held a showdown in eight different fields. One of the more important battles between the two teams were held under the theme, “Who can cry first?”

Among the four contestants (2 DBSK members and 2 UV members), Yunho came on top and shed tears in the shortest time span. When asked how he did so, Yunho said, “I thought about my late grandfather. I always wanted to show my success to my grandfather, but I haven’t been able to. Whenever I think about it, it brings me tears.”

Netizens commented, “Yunho’s tears, it breaks my heart,” “I’m sure he had a special relationship with his grandfather,” and “This episode really broke my heart.”

Yunho
DBSK
KPLG
God of Victory
How does this article make you feel?