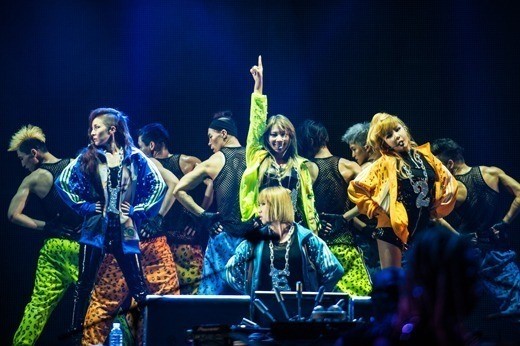 2NE1 is expected to bring in an estimated crowd of 200K fans to their on-going world tour concert. The world tour that began in July has attracted over 140K fans so far, making 2NE1 one of the hottest tickets in K-Pop this year.

The concerts in New Jersey and Los Angeles each brought in more than 14,000 fans , while their Japanese concerts sold over 120K tickets in total. In particular, 2NE1 became the first K-Pop girl group to make the Billboard’s Current Chart, their concert ranking chart, as they ranked at #29 after their U.S. concerts.

2NE1 has just recently confirmed the dates for their upcoming Taipei, Jakarta, Singapore, and Kuala Lumpur concerts. In total, the group will be visiting 11 cities across 7 countries, with more than 200K fans showing up in attendance.

The world tour concerts are also known for its world class quality as its directed by Travis Payne, who’s previously worked on Michael Jackson’s “This Is It” concert. 2NE1 also hired Divinity Roxx, the leader of Beyonce’s session band, as their main band leader, enhancing the overall quality of the show.