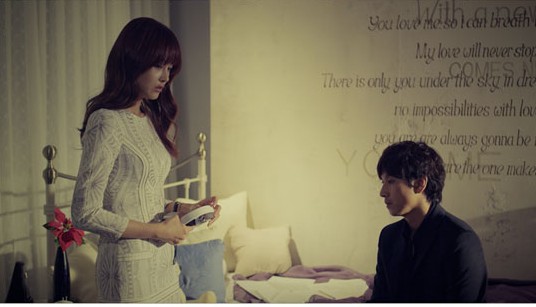 Romantic guy Lee Sun Gyun and “We Got Married” star Oh Yeon Seo has met as lovers in a new music video.

In the revealed images, Lee Sun Gyun and Oh Yeon Seo are being chased by killers, while emitting a strange but affectionate aura between the two. The two actors’ detailed facial expressions also drew many eyes.

Lee Sun Gyun, who is loved for his romantic guy image, transforms into a charismatic bodyguard, who protects Oh Yeon Seo from danger. Oh Yeon Seo appears as a boss’s daughter, who shows an innocent and whimsical charm.

In the music video, one of E2RE’s members, Hee Jung will appear as the killer herself, chasing after both Lee Sun Gyun and Oh Yeon Seo.

The name E2RE comes from the French word, “étoiler,” which means “stars shining in the sky” and also suggests that they will become stars of the K-Pop industry. Their debut title track is a mid-tempo song called “Deep Night Sad Song,” which is written by hit maker Jeon Hae Sung.