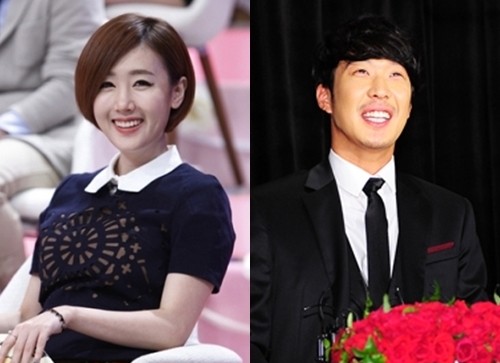 On the most recent episode of KBS “Happy Together 3,” Haha talked about different reactions of people to the news about his wedding. Haha stated, “I invited close friends and colleagues to my father’s 70th birthday party to make the wedding announcement. Kim Jong Kook couldn’t even eat. He and I had this comradeship since we work in the same industry and share similar beliefs about marriage. When I made the announcement, he was too shock to even say congratulations. He was just frozen there.”

Yoo Jae Suk, who was at the scene of Haha’s wedding announcement, further explained, “Yeah. Everyone at the event kind of froze upon hearing the news rather than celebrating and wishing Haha luck.”

On the other hand, comedians Park Mi Sun and Song Eun Yi had completely different reactions when they heard the news from Byul. Park Mi Sun, who is in the same bible study group as Byul, explained “We were surprised just like those frozen guys at Haha’s father’s birthday. However, we had a slightly different reaction. We all asked Byul, ‘Why?'” Park Mi Sun added, “I’ve always liked how Byul paid close attention to elderly people. I’m just really curious to know how they ended up together.”

Also on this episode of “Happy Together 3” appeared miss A‘s Suzy. Suzy commented, “Haha told me that he liked me. When I first read about his wedding, I felt as if I’ve been betrayed,” and jokingly pretended to be upset over Haha’s wedding, causing everyone to burst out into a laughter.